<![endif]--> Blockchain could be a boon for bunker industry

Blockchain could be a boon for bunker industry 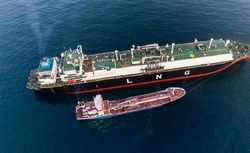 The blockchain industry is keen to sell the idea that its technology is a good way of solving problems in the bunker industry. There remain impediments to its adoption, though, such as availability of resources.

ability to gather data and foster trust is one of the main advantages of the move towards the use of blockchain technology in shipping, particularly in the bunker industry.

“At the very least, for now it’s about collecting data and ensuring that it’s verifiable,” said Deanna MacDonald, chief executive of Blockchain Labs for Open Collaboration, the technology and governance specialist.

Speaking at Sibcon 2018, she noted that the industry places trust in the paperwork it handles without being able to verify the information contained is accurate.

“On the one hand, it is about getting data which is very pragmatic and fundamental. On the other, it’s about making sure that it can be trusted. From there, we can start to talk about what we can do with that data,” Ms MacDonald said, suggesting that this included creating new business models and applications.

Digitalisation in the bunker industry is one of the ways to improve the efficiency of manpower in Singapore while also improving safety, said Claritec chief executive Wong Hong Lee.

The application of blockchain should start on the operational side, with functions such as safety and auditing, said Mr Wong.

For example, he suggested it could be used in relation to reporting on the high seas, where incident accounts can be taken soon after the event, thereby avoiding the concern that people’s accounts of events have been changed along the way, since use of the technology precludes that.

“Once you have your safety audits on a blockchain, the next vetting will be easier because the information there is original [not changed],” said Mr Wong.

Safety and proof of origin were other points highlighted by Ms MacDonald. “If you trust the proof of origin, because it is tamper-proof — or at least tamper-evident — then you are able to make better decisions.”

She cited the bunker industry as an instance where such transparency is not available at present. For example, there are hardly any systems to determine the fuel source or for sulphur compliance in future ahead of 2020.

She pointed out that it has been almost impossible to trace where the current fuel contamination crisis has come from because there is no proof of origin or chain of custody on that information as it passes through the bunker supply chain.

“So the way you create decision support systems is not just about the data but being able to trust it and you trust it because you know the source,” Ms MacDonald said.

She conceded that there are challenges to fully embracing digitalisation in the industry as levels of development and digital competence can vary greatly.

“It’s not that the entire industry necessarily has technology; some of them have computers on board the bunker barges, some don’t. Some use phones. Others may not even have smartphones,” she said.

“The point of the education in technical literacy is massively important in this phase because you’re in an industry where it’s not necessarily a given that people even know what a basic level of technology is or that they have the connections or the speeds to make it work.”