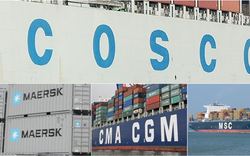 Despite a smaller number of carriers operating in the market, the number of container services between countries has increased. But consolidation has also brought about its own concerns, particularly for port and terminal operators.

Concerns regarding rising protectionism and overcapacity in container shipping could challenge the benefits of consolidation, but growth opportunities still exist

THE number of container liner shipping services per country has increased for the first time since 2004, despite the increasing trend for consolidation between carriers, according to a new report from the UN’s Conference on Trade and Development.

“Several individual carriers, both inside and outside alliances, expanded their networks to a larger number of countries,” Unctad said in its 2018 Review of Maritime Transport. “This more than offset the reduction in the global number of companies after the takeovers and mergers.”

This was not, however, a broad-based trend, Unctad added. Smaller island nations and vulnerable economies suffered from a reduction in services during 2017-18.

“By joining forces and forming alliances, carriers have strengthened their bargaining power vis-à-vis seaports when negotiating port calls and terminal operations,” the report said. “In an oversupplied market, consolidation is expected to continue.”

Liner shipping alliances and vessel upsizing have made the relationship between container shipping lines and ports more complicated and have triggered new dynamics whereby shipping lines have greater bargaining power and influence, the report added.

“Vessel size increases and the rise of mega alliances have heightened the requirements for ports to adapt. While liner shipping networks seem to have benefited from efficiency gains arising from consolidation and alliance restructuring, the benefits for ports have not evolved at the same pace.”

Together, these trends have heightened competition among container ports to win port calls with decisions by shipping alliances regarding capacity deployed, ports of call and network structures being potentially able to determine the fate of a container port terminal.

“This dynamic is further complicated by the shipping lines often being involved in port operations, which in turn could redefine approaches to terminal concessions,” the report said.

While 2017 had been a relatively successful year for container lines, the report identified several key trends that were shaping the sector’s outlook.

On the demand side, there was considerable uncertainty arising from wide-ranging geopolitical, economic and trade policy risks, as well as some structural shifts.

“Of immediate concern are inward-looking policies and rising protectionist sentiment that could undermine global economic growth, restrict trade flows and shift their patterns,” the report said.

The “continued unfolding of digitalisation and e-commerce” and the implementation of China’s Belt and Road initiative also bore implications for maritime trade.

“This, in turn, will upset the supply and demand balance and have repercussions on freight-rate levels and volatility, transport costs and earnings,” the report said.

“Liner shipping consolidation through mergers and alliances has been on the rise in recent years in response to lower demand levels and oversupplied shipping capacity dominated by mega container ships. The implication for competition levels, the potential for market power abuse by large shipping lines and the related impact on smaller players remain a concern.”

The impact of this consolidation could be seen in the relationship between ports and container lines, the report added.

“Competition authorities and maritime transport regulators should also analyse the impact of market concentration and alliance deployment on the relationship between ports and carriers,” the report said.

“Areas of interest include the selection of ports of call, the configuration of liner shipping networks, the distribution of costs and benefits between container shipping and ports, and approaches to container terminal concessions.”

As well as the well-publicised concerns regarding the implementation of the International Maritime Organization’s low-sulphur regulations, box shipping is also likely to be increasingly affected by technological change.

“Technological advances in the shipping industry, such as autonomous ships, drones and various blockchain applications, hold considerable promise for the supply side of shipping,” the report said.

“However, there is still uncertainty within the maritime industry regarding possible safety, security and cyber security incidents, as well as concern about negative effects on the jobs of seafarers, most of which come from developing countries.”

But with many technological advances applicable in ports and terminals, there was an opportunity for port stakeholders to innovate and generate additional value in the form of greater efficiency, productivity and heightened environmental protection.

“In light of these developments, ports and terminals worldwide need to re-evaluate their role in global maritime logistics and prepare to effectively embrace and leverage digitalisation-driven innovations and technologies,” the report said.