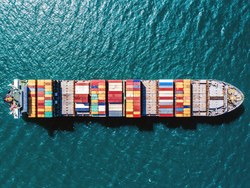 Confidence levels in the shipping industry have dipped because of worries about trade wars. Respondents to the latest Shipping Confidence Survey expect a tariff war to have some impact on the industry during the next 12 months.

Despite the overall slide, the confidence level of owners and charterers has increased, Moore Stephens finds

CONFIDENCE levels in the shipping industry fell slightly during the three months to August amid fears of a trade war, according to the latest Shipping Confidence Survey from accountant and shipping adviser Moore Stephens.

In the August edition of the survey, the average confidence level expressed by respondents in the markets in which they operate was 6.3 on a scale running from a low of one to a high of 10. That represents a drop of 0.1 from the 6.4 figure recorded in May 2018.

Yet the confidence level of both owners and charterers has actually increased.

About 44% of respondents said they expected tariff wars to have some impact on the industry over the next 12 months.

Some 42% categorised the potential impact as considerable while 11% of respondents believed that it would be minimal.

“Concerns about geopolitical factors dominated the comments from respondents. These were led by President Trump’s efforts to transform US trade relations, but also included state support for shipping in China and South Korea,” said Moore Stephens shipping and transport partner Richard Greiner.

“Shipping will always stand to reap the benefits of its global identity and presence but will also court the risks that this must inevitably embrace” he added.

“Fortunately, shipping is accustomed to playing on the big stage, against a volatile backdrop and to a demanding audience.

“The Baltic Dry Index is up on a year ago and oil prices are on the rise. These and other positive portents encourage the belief that shipping is starting to recover, albeit slowly, from a 10-year downturn.”

According to Moore Stephens, demand trends were identified by 28% of respondents as the factor likely to influence performance most significantly during the coming 12 months. Competition (23%) was in second place, followed by finance costs.

Meanwhile, the number of respondents who expected finance costs to increase over the coming year fell to 59% from 63% in the previous survey.