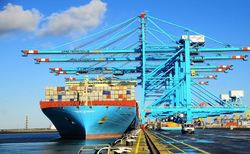 The 2M alliance has made a positive first move by reducing capacity on the Asia-northern Europe trade route. But unless rival lines follow suit, low load factors will continue to push down rates.

THE 2M alliance’s move to withdraw capacity from the Asia-Europe trade may have come too late to have any significant effect on the trade lane, according to analysts.

2M alliance partners Maersk Line and Mediterranean Shipping Co will suspend one of their flagship Asia-Europe loops, AE2/Swan, using ultra-large containerships of more than 19,000 teu, at the end of this month.

But while the loop is being suspended, many of the ships deployed would remain active in the trade, Drewry said.

“Maersk will cascade its three units from the AE2/Swan into the AE1/Shogun service, which uses slightly smaller units of about 17,500 teu,” Drewy said.

Maersk confirmed that the current AE1/Shogun ships will either be idled or sent to dry dock for maintenance, the analyst added.

“Assuming it is a straight swap and all of the AE1/Shogun ships are pulled, the impact on capacity will obviously be slightly less powerful than had the bigger AE2/Swan ships been pulled, but it will still remove some 5.7% of westbound capacity from Asia-northern Europe.”

The reduction of capacity on the Asia-Europe trade lane comes at a time of increased pressure on carriers plying the trade.

“The demand growth that has been evident elsewhere, such as in the transpacific, simply refuses to come,” Drewry said. “After seven months of the year westbound volumes from Asia to North Europe were down by 1% following lacklustre demand in the two key import markets of the UK and Germany.”

The slowdown has been made more acute by the influx of ULC tonnage joining the fleet, driving load factors from 91% last year to just 84% at the end of July.

“With those supply and demand fundamentals trending negatively, it is therefore no surprise that spot market freight rates have spent the greater part of this year below the corresponding level of a year ago,” Drewry said.

While carriers had brought in ad-hoc blanked sailing to increase vessel utilisation, something more radical was required ahead of China’s Golden Week holiday, which starts at the beginning of October, it added.

But the move by the 2M partners may not be enough.

“Ultimately, the temporary withdrawal of the AE1/Shogun ships is more an exercise in damage limitation, rather than a move designed to raise freight rates,” Drewry said.

“Combined with a raft of blanked voyages being announced almost daily by other carriers it is possible that utilization will manage to hold its current ground in the mid-80% range, in which case spot rates could continue to beat last year’s trend, albeit still heading south.”

For utilization and rates to rise to sustainable levels would require further service cuts, ideally from the Ocean Alliance of CMA CGM, Cosco and Evergreen, which will become the largest capacity provider on the Asia-Europe trade following the removal of the 2M service.

“Whether those lines are prepared to cede market share for the greater good of the market remains to be seen,” Drewry said. “The 2M lines will be hoping that their generosity is reciprocated but should not count on it.”