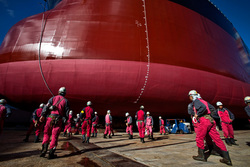 Appetite for large tankers remains firm as shipyards pull in order for trio during August.

Confirmation of the tanker orders came in the latest monthly report from the Japan Ship Exporters’ Association (JSEA).

The trade association does not name the shipyards or owners involved in the orders. Neither did it give prices of delivery dates.

The last reported VLCC orders contracted in Japan were reportedly placed by the Navios Group at Imabari Shipbuilding, according to Clarksons.

According to the UK shipbroker, average VLCC newbuilding prices are currently at $90m, increasing by 2.7% over the past three months.

The three VLCCs helped Japanese shipyards to double their ship export orders for August to 1.5mgt, compared to a year ago.

JSEA member yards booked export orders for a total of 21 ships in August, with the bulk of the orders made up of bulkers in numerical terms.

For the financial year-to-date – April to August – JSEA member yards have reported orders for 81 ships of 3.6mgt.

JSEA members include some 22 shipbuilding groups as well as aa of Japan’s major trading houses, according to its website