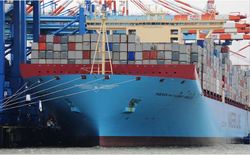 Carrier is to install scrubber technology on a ‘limited number of vessels’, despite low-sulphur fuel preference to meet 2020 sulphur cap.

Maersk says that it is looking into all possible and available opportunities to ensure it is ready to comply with new regulation.

MAERSK Line may have been reluctant in the past, but the company is planning to roll out scrubber technology on at least some of its 750-strong box fleet as it looks to ensure that it meets the global sulphur cap come 2020.

Despite chief executive Søren Skou declaring only two weeks ago that the carrier does not like the solution, preferring to take sulphur out at the refineries, the carrier has revealed that it will invest in new scrubber technology on a “limited number of vessels”.

A spokesperson for the Copenhagen-based carrier declined to specify how many ships will have scrubber technology installed, but did concede that the number goes beyond piloting.

Last month, upon release of the group’s second-quarter results, Mr Skou said that Maersk had chosen low-sulphur fuel as its sulphur cap solution rather than install scrubbers on its fleet.

Maersk says low-sulphur fuel could push up costs by $2bn

He said fitting scrubbers on a fleet the size of Maersk’s was not feasible. “We don’t like the solution,” he said.

In a statement, Maersk this week said it was looking into “all possible and available opportunities” to ensure it would be ready to comply with the 2020 sulphur cap, whether through compliant fuels, LNG or scrubbers.

“As part of the preparations, we have decided to invest in new scrubber technology on a limited number of vessels in our fleet of around 750 container vessels,” the company told Lloyd's List.

It added: “It is important to underline that the vast majority of ships in the global fleet, as well as the Maersk Line fleet, will have to comply with the global sulphur cap through the use of compliant low-sulphur fuels in 2020 given the short time frame.”

The company reiterated that as it continued to explore the best option to meet regulations, it still believed “the best solution remains with compliant fuels from refineries on land”.

It said: “Using scrubber technology is a small part of – and just one of several elements in – our overall 2020 fuel sourcing strategy to ensure compliance in time,” it said.

Last month, Maersk, the world’s largest box carrier, announced that it was joining forces with independent tank storage operator Royal Vopak to launch a low-sulphur bunkering facility in Rotterdam that would cater for up to a fifth of Maersk’s fuel demand after 2020.