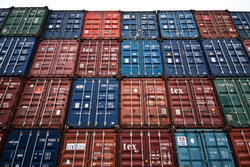 The full-year containership delivery total is expected to be in the region of 1 million to 1.2 million TEU, based on the current delivery schedule, according to shipping consultancy Drewry.

Orders with a 2018 delivery schedule first appeared in early 2014 and since then the figure has swelled with every new order and slippage from previous years. The expected sum for 2018 reached a peak in October 2017 when the unadjusted orderbook had 1.6 million TEU slated. With slippage from previous years added the expected total for the year was close to 1.8 million TEU.

The new supply growth forecast for the current year is lower than demand, meaning that the global supply-demand index is set to nudge upwards this year. The market will still be over-supplied, but not catastrophically so, and certainly showing signs of improvement.

“While we are anticipating a more benign overall supply scenario for 2018, it would be remiss not to mention that pressures will still exist and vary in severity trade by trade as a consequence of the growing share of Ultra Large Container Vessels (ULCVs) of 18,000 TEU and above in the orderbook.”

Looking further ahead, the low-level newbuild contracting of 2016-17 means that there is not much scheduled for delivery post-2019, most of which comes from slippage caused by deferrals from earlier years. Based on Drewry’s current projections, there is a clear need for extra newbuilds for 2020 onwards to satisfy the expected cargo growth.

“The reality of supply growth in 2018 is far less frightening than it was previously. We expect new ordering activity to rise off the floor, but stay at a level that incrementally improves the supply-demand balance over the next five years.”