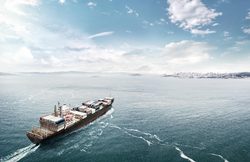 Box shipping was supposed to see a rebalancing of supply and demand this year. But deliveries of ultra-large tonnage and slow demand growth on the Asia-Europe trade may see that imbalance continue.

CONTAINER shipping’s predicted fundamental supply-demand rebalancing this year, and the resulting higher freight rates, now seem unlikely to happen, with the mismatch between demand and supply most apparent on the major east-west trades, according to international shipping association BIMCO.

But this was still lower than nominal fleet growth of 3.9% during the same period, with the active fleet expanding even faster.

The headwinds that have faced container lines this year, in the form of overcapacity that has limited prices, have been less about the size of the demand-supply mismatch than its distribution by trade.

In his latest market report, Mr Sand said that 83% of the newbuildings delivered in 2018 were ships with a capacity of 10,000-plus teu. “They were made for long sailing distances. This compares to 37% of the volume growth being short-distance, intra-regional trades — for example, intra-Asia or intra-Europe.”

Spot rates on Asia-Europe services have been bearish for much of the year – gains in recent weeks saw spot rates on Drewry’s Shanghai-Rotterdam index climb to $1,803 per feu on August 30, up 6% compared to a year earlier – despite what BIMCO described as “positive economic development in Europe” that has seen imports rise 4.1% this year.

The problem for container lines, according to Mr Sand, is that growth in European import demand has focused on secondary, middle-distance trades from North America, the Indian subcontinent, the Middle East, and South and Central America — trades that are serviced mostly by ships below 10,000 teu — rather than on Asia-Europe services where most of the largest new boxships are deployed.

Mr Sand also noted that whereas the initial rounds of the trade war between the US and China were focused on steel, aluminium and soya beans, more recent rounds, and an additional $200bn of US tariffs on Chinese imports that could be implemented this month, were more focused on containerised goods.

“BIMCO estimates that tariffs imposed on July 6 affect 670,000 teu, with an additional 270,000 teu affected from 23 August,” said the report. “In total, 9% of US west coast imports are now part of the speeding train towards a trade war.”

“All three aspects of the supply side have pushed up the fleet growth – in nominal as well as active terms,” he said. “The yards have delivered 947,000 teu of newbuilt containership capacity, slightly above our expectations.

“What has been completely off our expectations has been the fact that only 36,833 teu of capacity was demolished by early August. During the second quarter of 2018, just five ships (9,608 teu) were taken out. It has been 10 years since we last had such a low level of capacity removed.”

He said “the roller-coaster ride of reductions and reactivations” has been pushing the active supply growth up, resulting in falling freight rates as demand is growing at a slower pace.

Previously BIMCO had predicted that the fundamental container shipping supply-demand balance would improve for lines during 2018 resulting in higher freight rates across the board as a result of the fleet growing slower than demand. However, “it seems as if it’s not going to happen”, Mr Sand said, due to slower than expected demand growth and much faster fleet expansion.

“Having said that, a different distribution of demand growth — away from the short intra-regional hauls towards the longer-distance trades — would have meant a better match of newbuild ships and demand growth, and potentially better earnings,” he said.