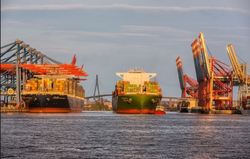 The Port of Hamburg saw container throughput fall 2.7% to 4.3m teu in the first half of 2018, mainly due to handling of fewer empty boxes. The port said in a press release that 525,000 teu or 15.6% fewer empty containers were handled during the period, while throughput of loaded containers was almost flat at 3.8m teu, sliding just 0.6%.

Meanwhile Port of Hamburg’s intermodal connections are improving, with railborne container movements rising 5.4% to 1.2m teu. “In the 2018 first half, the previous year figures were beaten, and even the 2016 record. Landside seaport-hinterland transport by rail therefore developed especially satisfactorily,” the port said. Overall rail’s share of the intermodal transport split rose 2.3 percentage points to 45.1%.

“A glance at the throughput trend for loaded and empty containers in the first six months shows that the Port of Hamburg handled less transhipment cargo and empty boxes. Its share of loaded containers remained stable in a tough competitive field, while Hamburg’s significance as Europe’s leading rail port was underlined by distinct growth in railborne container transport,” said Axel Mattern, joint ceo of Port of Hamburg Marketing.

“Against the background of the still outstanding adjustment of the fairway on the Lower and Outer Elbe, it is understandable that shipping companies should utilize slot capacities on mega-containerships calling at Hamburg primarily for loaded boxes. Unlike cargo bound for the local region and loaded boxes, transhipment cargo and empty containers are less tied to specific ports. We therefore hope that planning permission will be granted before the end of the year, and the fairway adjustment finally implemented after a wait of 17 years.”

Almost 64% of the downturn in container throughput in the first half of 2018 is attributable to lower transhipment throughput, primarily on feeder services in the Baltic. Transhipment handling for the first six months totalled 1.6m teu, 4.4% less than in the previous year.

“Transhipment performance, or its share of total container handling, may have dropped in the first half by comparison with the previous year by 0.7 percentage points to 37.9%. At the same time, however, the Port of Hamburg consolidated its position as the hub for freight bound for the Hamburg Metropolitan Region or originating there. Local cargo’s share continues to develop steadily,” commented Ingo Egloff, joint ceo of Port of Hamburg Marketing.