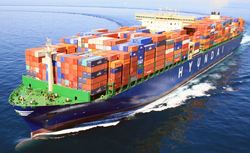 South Korean carrier posts a net loss of $215m for the second quarter, a worse result compared with both the previous quarter and the same period a year ago, despite a 17% increase in cargo volume.

Company expects market conditions to improve in the third quarter of the year.

HYUNDAI Merchant Marine has posted bigger losses in the second quarter of this year compared with one year ago because of weaker freight rates and higher fuel costs.

Operating losses also worsened to Won199.8bn from Won170.1bn in the first quarter of the year and Won128.1bn in the second quarter of last year.

It added that average unit cost of Bunker C oil 380 cSt in the second quarter had increased 26.7% year on year.

The weaker quarterly earnings come despite a 17% jump year on year in liftings to 1.15m teu and a standstill in revenue to Won1.24trn.

Load factor reached 79.1% in the past quarter, up four percentage points from a year ago.

HMM expected rates as well as load factor to improve in the third quarter amid traditional peak season.

It also said it would continue its efforts to secure additional cargo volume before taking over newly ordered, eco-friendly mega container ships.

The Seoul-listed shipping line signed letters of intent in June with three compatriot shipbuilders to build a dozen 23,000 teu ships and eight 14,000 teu vessels to be delivered between 2020 and 2021.

“HMM will do its utmost to attain competitiveness as one of the top global carriers by improving its cost structure and reducing operating costs through fleet expansion and securing terminal assets,” the company said.