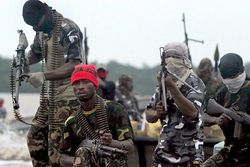 NIGERIA HAS HAD 31 INCIDENTS OF PIRACY IN ITS WATERS SO FAR THIS YEAR.

EVERY single crew kidnapping so far in 2018 has occurred in the Gulf of Guinea in six separate incidents, as piracy in other traditionally dangerous regions retreated, according to the International Maritime Bureau’s latest report.

“In total, 69 vessels were boarded, with 23 attempted attacks,” the report said. It added that “11 vessels were fired upon and four vessels hijacked. No vessels were reported as hijacked in the second quarter”.

The number of crew members taken hostage in the first six months increased to 102 from 63 in the year-ago period.

However, all 25 crew kidnappings reported occurred in the Gulf of Guinea, according to the IMB, which says the actual number of incidents is likely to be significantly higher than reported incidents.

Nigeria has had 31 incidents in its waters so far this year, up from 13.

The region was struck by a series of high-profile hijackings during the first quarter, including two separate incidents in which a total of 44 crew members were abducted. The vessels and the crew members were subsequently released.

While there were no hijackings in the second quarter, abductions continued. Eleven crew members were taken off the ForestWave in late April before being released four weeks later.

Elsewhere, the IMB reported two attempted attacks in Somalia, the most intense piracy stronghold until mid-2012, while in the Gulf of Aden, there were no reported incidents in the second quarter.

Meanwhile, incidents in the Philippines dropped from 13 during the first half of 2017 to three in 2018.

The Singapore-based Regional Co-operation Agreement on Combating Piracy and Armed Robbery against Ships in Asia reported a 10-year robbery  low during the first six months of the year.

Of 2018’s 107 incidents, 22 and 21 involved ships controlled by Greece and Singapore respectively