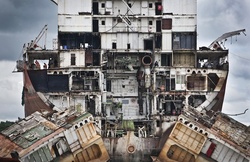 The number of container ships sold for scrap has plummeted by more than 80% in the first half of this year as a result of higher freight and charter rates and a reduction in the average fleet age, IHS Markit figures show. As a result, demolition of container ships could hit a seven-year low this year if current trends continue.

Reflecting higher freight rates, the Shanghai Containerized Freight Index (SCFI) trans-Pacific spot shipping rate has risen by nearly 20% this year compared with 2017.
The average age of the global container ship fleet has fallen to 11 years.
“When you look at the numbers, the vessels sold for demolition have fallen off a cliff. The number is so low is because there is nothing left to kill off,” said Devlin McStay, senior data transformation analyst II at IHS Markit Maritime & Trade.
Just 18 container ships left the global fleet in the first six months of this year compared with 100 between January and June 2017, equivalent to a drop of 82% year on year. By comparison, 152 box ships were scrapped in 2017.
In terms of capacity, box ships totalling 304,905 teu were sent to the breakers in the first half of 2017, while ships of 43,839 teu left the fleet up to 30 June, down by 86% year on year.
Extrapolated over the full year, the number of box ships sold for scrap this year could be the lowest since 2011, when ships totalling about 80,000 teu were demolished, while about 180,000 teu was sold for demolition in 2015.
By comparison, ships of 434,786 teu were taken out of service for the whole of 2017.
“It seems that demolition peaked back in 2016, and since the start of 2017, it has been on a steady decline, down to almost zero now,” said Ralph Leszczynski, head of research as ship broker Banchero Costa (Bancosta) in Singapore.
“Scrap prices are still very high, but with improved market conditions and more consolidation among the carriers, they now prefer to keep the tonnage they have,” Leszczynski told Fairplay.
“One thing that is interesting is the reduction in the number of Panamax-sized container ships that have been scrapped,” McStay added. 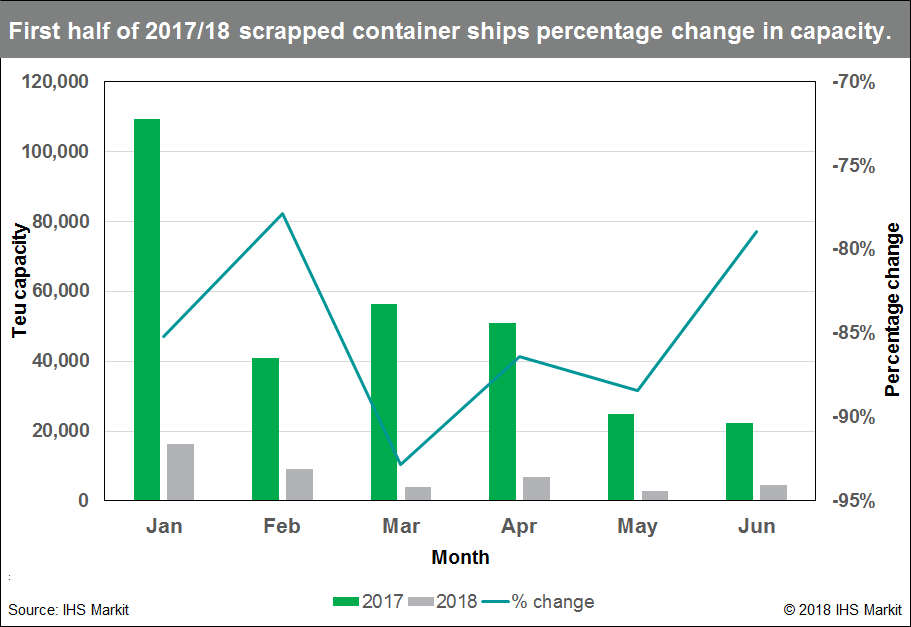 Some 35 Panamax box ships of 4,000 and 5,399 teu were sold for recycling in the first six months of 2017. By comparison, just one vessel left the fleet so far this year, according to IHS Fairplay figures.
“There aren’t very many of the old vessels left, so there are not so many to be scrapped. If they are old enough, they have already gone for scrap,” McStay said.
“Overall, the average age of the container ship fleet is 11 years. It’s relatively low compared with what it was in the past.”
Apparently, bucking this wider trend is the feeder ship segment, in which 69 ships of 1,000–2,999 teu sold out of the fleet in the first half of 2017, compared with just 3 disposals up to June of this year.
That comes as charter rates for feeder ships have reached a three-year-high, even though  about 25% of the vessels of between 500 and 2,000 teu are over 20 years old.
Higher freight rates, coupled with strong cargo and vessel demand, have buoyed the container-ship market.
“Increased market activity has led to higher demand for charters and kept the idle fleet down. So you have both the carriers and the other shipowners who charter tonnage out to the carriers incentivised to keep tonnage active rather than headed for the scrapyards,” said Dustin Braden, data analyst with IHS Fairplay affiliate JoC.com.
Three-year timecharter rates for a 6,800 teu container ship have been at about USD19,250/day for the past four months, the highest daily average since 2015.
“Another sign of the strong demand for shipping that has kept these ships on the water can be seen in the year-over-year change in SCFI trans-Pacific spot shipping rates, which are up by nearly 20% from last year, when the rates were still inflated by the bankruptcy of Hanjin Shipping,” Braden added.
However, Braden cautioned that the current market buoyancy could come under pressure.
“With growth slowing in US imports from Asia, the largest single US import market, this situation could change, as carriers on the trade are already adjusting their networks to reduce capacity,” he said.
0
Tags: scrapp 2018 container ship
Visit Home
Send to friends
Print
Newsletter
Share this news