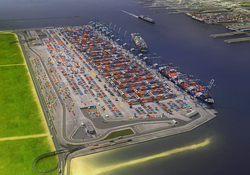 The Port of Virginia handled 2.8 million TEUs during fiscal year 2018 (FY18), a rise of 2.4 percent when compared with last fiscal year, mostly due to an increase in imports.

The port’s fiscal year closed June 30 and in that month the port handled 223,842 TEUs, which was a drop of 3.4 percent when compared with last June.

As in April and May, June’s volumes were off when compared to the same months last year because of an ongoing effort to limit the number of empty containers flowing across the terminals during construction.

Reinhart added that the port was off from its forecast, mostly due to the effort to limit the empty container imports and exports.

“As a result, our total empty container volume was down by more than 76,000 TEUs. What’s important is that our action is having its desired intent, which is to increase efficiency at the terminals and ensure that loaded containers are our priority right now.”

The port is currently in the midst of a USD 700 million capacity expansion at its two primary container terminals, Virginia International Gateway (VIG) and Norfolk International Terminals (NIT).

“Our expansion is on schedule and on budget … And, we have the federal approval to begin the process to widen and deepen the commercial shipping channels serving the Norfolk Harbor,” Reinhart concluded.