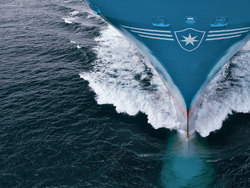 Many ports are unable to handle the  new generation of 20,000 teu ships efficiently, which is adding to delays across the network that Maersk and MSC are now taking action to resolve

MAERSK Line and Mediterranean Shipping Co are prioritising efforts to improve service reliability which has deteriorated in recent months.

Ship speeds are being reduced and other actions are under consideration as the world’s top two container lines decide how best to achieve punctual arrival times across their 2M network.

The pair have already slowed down vessels in their joint Asia-Europe services, cut the number of port calls, and added a ship to one loop.

But they agree that more needs to be done to make sure services run to schedule.

“We are not satisfied with the reliability that is being delivered to our customers at the moment,” Maersk’s head of network management Anders Boenaes told Lloyd’s List.

He was echoing similar sentiments expressed last week by MSC Group chief executive Diego Aponte who said it was important for ships to arrive on the published day of the week. In many cases, that is not happening and customer complaints are on the increase.

Both sides share the same objective of restoring schedule reliability and agree that slower steaming is one essential tool, but have slightly different views on what other levers to apply.

Under review is whether it is better to deploy more ships  or eliminate some port calls.

“We agree with the need to slow down the network in order to create more of a buffer and become more reliable, but it can be done either by adding ships or reducing the number of  port calls,” Mr Boenaes said.

The problems are not confined to the 2M alliance.

The whole container shipping industry is suffering from a decline in service quality, caused in part by poor weather conditions last winter in Asia, Europe, and North America. that closed ports, sometimes for several days.

The arrival of a new generation of ultra large 20,000 teu-class containerships is adding to the strain, with many ports unable to handle them quickly enough.

Once a delay occurs in one major port, and then ships from several other services start to back up as they wait to berth, “it is like the worst case of dominoes you can imagine,” said Mr Boenaes.

And when the vessels held up are some of the biggest in the world, the schedule delays throughout the whole network are even more disruptive.

“Terminals have not increased productivity proportionately with the increase in vessel sizes,'' said Mr Boenaes. ``That means the number of hours spent in port is significantly higher than would have been expected.''

He added: “From a terminal efficiency point of view, the big ships have not delivered the economies that had been hoped for, but on the water it is a totally different story, and they are performing extremely well.”

The deteriorating situation has resulted in fewer than 70% of ships arriving in port within 24 hours of the published time, according to SeaIntel, the worst result since the consultancy began measuring performance levels.

Consequently, the 2M duo has already started to adjust its Asia-Europe schedules through the 5.0 iteration of their joint services on this route.

Within their six Asia-North Europe services, 18 ports calls have been eliminated and one ship added, while average ships speeds have been reduced from 18 knots to about 17 knots, in order to create more elasticity in the network

These new schedules are still being phased in, so it is too soon to tell how much of an improvement in service reliability has been achieved. But both Maersk and MSC think still more will need to be done, with the same methods likely to be applied again.

Slower steaming will shortly be introduced on the Atlantic where services are under comparable pressure to those in the Asia-Europe trades.

Similar levers may also be applied to improve transpacific services, although that route is more complicated. For example, there are fewer port calls and ships per loop in Asia-US west coast strings. That gives less flexibility to fine-tune the product.

Like MSC, Maersk has retrofitted all of the large ships in its fleet, fitting new propellers, rudders and bulbous bows. Engine power has also been reduced, so that optimum speeds are now around 18 knots rather than nearer 22 knots in the past. Ships still to be delivered have also been designed to operate at a slower pace. That has made it harder for ships to speed up when running late, as well as adding to fuel bills.

The actions already taken to lower ships speeds will save between $10m and $15m per Asia-Europe loop a year, Mr Boenaes estimates, although burning less fuel is not the main objective

“We want to create a better and more reliable product for our customers, and reduce all the related costs associated with being late, whether it is extra transhipment, the storage of customers’ cargo, or other ancillary costs, let alone the cost that lies with the customer if a shipment is delayed,” he said.

Neither Maersk nor MSC expects shippers to object too much if sailings take a few days longer than the former published times.

Both say they believe customers would prefer transit times that were two or three days longer, but with guaranteed arrival dates, than be promised a voyage time that cannot be relied upon.