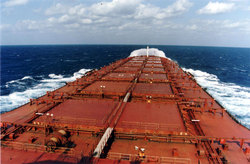 Despite the market remaining fairly active, it was a steady week on the whole. Many owners are still opting to ballast across the Atlantic to take advantage of the firmer Caribs market. Meanwhile, questions have been asked in the UKC, where the tonnage list has been steadily building after a quiet period. Although this market remains untested, most owners feel some optimism that freight rates could rise.

The Black Sea market remained on the softer side this week, as did WAF, with the rate on the WAF-UKC route falling w-o-w to WS 67.5. The tonnage list in WAF now looks enough to absorb the remaining volumes for June, although an uptick in rates in the MEG may draw some Eastern ballasters away, leaving the list in WAF finely balanced off end-month dates.

Rates in the Med/Black Sea continued their decline, with rates falling notably w-o-w to WS 92.5 on a number of routes. In the North Sea/Baltic, the market didn’t really get going, with the Baltic-UKC rate falling w-o-w to WS 72.5. 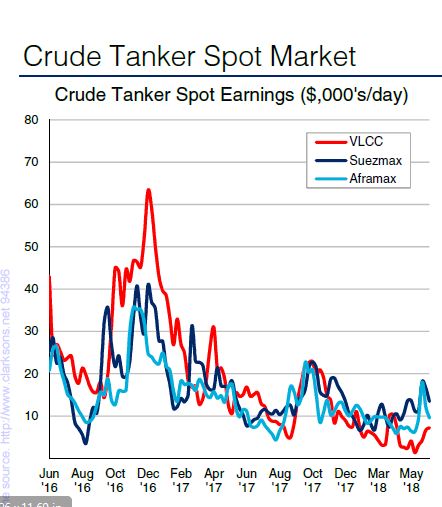 West of Suez: It was a slow week in the Handy market, with the rate on the Baltic-UKC route holding at WS 147.5. In the MR market, there was some activity on the UKCUSAC route, although the rate fell to WS 115, whilst the LR1 market was quiet with a significant lack of fresh enquiry.

East of Suez: It was a disappointing week for the MRs, with rates falling on a daily basis .

The dirty Panamax market was fairly steady w-o-w, with rates on the UKC/Med-US Gulf routes standing at WS 105. 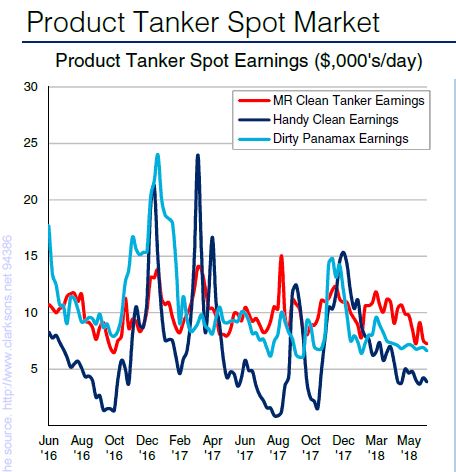 The Capesize market strengthened further this week, as a number of fresh cargoes became available out of Brazil and Australia, and as the oversupply of tonnage in Brazil continued to subside. The spot rate on the W.Aus- Qingdao route rose to $8.00/tonne, while average Capesize spot rates rose 34% w-o-w to $15,200/day.

In the Atlantic, sentiment in the Panamax sector remains positive, with rates being supported by a steady flow of fresh cargoes out of ECSA, the USG and NCSA. The Pacific market was also supported by the tighter Atlantic market, with sentiment in the basin remaining positive and spot rates rising w-o-w across the board.

In the Atlantic, Supramax trip rates on routes out of ECSA and the USG were supported by more limited availability of Panamaxes as the market tightens in the basin. Rates in the Pacific generally softened slightly, although the backhaul was supported by the firming Atlantic market. There was a notable decrease in containership timecharter market activity this week, alongside the biennial Posidonia events in Athens, although this appears to have had only a minor impact on the rate expectations held by many boxship owners. The majority of the activity this week took place in the Asian region.

Likewise, vessels in the ‘old Panamax’ containership sector continue to achieve firm rates, although there remains some uncertainty over expectations for the rest of the summer. Meanwhile, units in the sub-3,000 TEU ‘feeder’ sector are still regularly achieving rates of between $11,500 and $12,500/day (withthe exception of the new generation ‘eco’ designs). Fixture periods meanwhile tend to be shorter moving down the vessel size ranges. 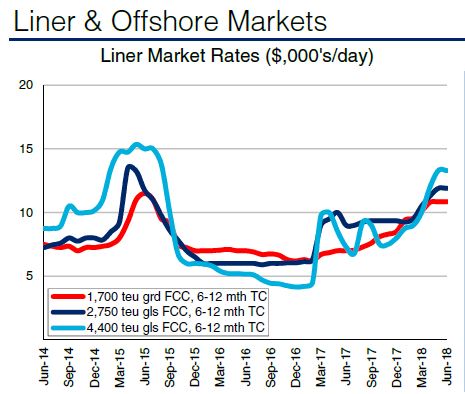 In the gas carrier sector, Alpha Gas has declared an option for a 173,400 cu.m. LNG carrier at Daewoo (DSME), scheduled to be delivered in Q1 2021. The unit will be the third vessel in the series. Elsewhere, Keppel Singmarine has won an order for a 7,500 cu.m. LNG bunkering vessel from FueLNG (a joint venture between Keppel Offshore & Marine and Shell Eastern Petroleum). This single unit is scheduled to be delivered in Q3 2020 from Singapore.

Provisional customs data showed that Chinese iron ore imports rose 3% y-o-y to 94mt in May, the highest level and fastest pace of growth seen since January, reportedly reflecting the record levels of steel production seen in the country in recent months. Total Chinese iron ore imports during January-May stood at 447mt, around 1% higher than in the same period of 2017.