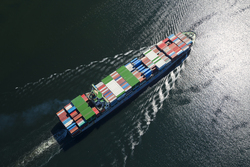 DIEGO Aponte has put punctuality and profitability centre stage in a radical overhaul of Mediterranean Shipping Co’s container shipping network, with loss-making services to be axed and vessel speeds reduced.

“We have decided to go for more slow steaming, and will add vessels to current strings that we operate, in order to improve punctuality,” Mr Aponte told Lloyd’s List. “We believe that for our customers, it is more important to be regular, and for ships to arrive on the published day of the week.”

Mr Aponte also said there would be huge benefits for both the mainline vessels and feederships from injecting more tonnage into the network.

The goal is to add a vessel to every string that is underperforming in order to ensure all ships run on time. But ports will not be added, because that would be counter-productive.

The drastic measures being taken by MSC follow a very poor start to the year for all container lines, with freight rates under severe pressure, and consolidation that was expected to improve the industry’s financial performance so far failing to deliver.

MSC has already started to slow down its ships and put an extra vessel into service loops when the opportunity arises in its north-south services. It has also approached its 2M partner Maersk about taking similar action in the east-west trades where the alliance operates, and is awaiting a decision. The changes could be in place within two or three months, assuming the pair come to an agreement.

By cutting ship speeds and adding another vessel to the string so as to maintain weekly schedules, MSC hopes to create sufficient slack in the system to improve schedule reliability, which has declined in recent months. Slower ship speeds will also lower emissions.

By also withdrawing from unprofitable routes, MSC says it will have sufficient ships in its fleet that can be repositioned to other trades, without having to resort to the charter market where rates have strengthened very considerably in recent months.

“We want to be profitable and therefore those lines that are not yielding a result will be scrubbed,” said Mr Aponte.

One loop to be eliminated for example, is MSC’s Asia-Red Sea service, while others are also under scrutiny.

Some 20 years ago or so, ships in the main east-west trades were operated at speeds of 26 knots or more. A typical Asia-Europe service would have consisted of eight ships on a weekly rotation.

But then slow-steaming and super slow-steaming became the norm as fuel prices rocketed. In some backhaul trades, speeds were as low as 13 or 14 knots, while as many as 11 or 12 ships would be in an Asia-Europe string. The costs of operating more ships was greatly outweighed by cheaper bunker bills, carriers calculated.

As slower speeds became standard, ships were redesigned and smaller engines installed to be operated at around 18 knots.

However, average speeds on fronthaul legs have now crept up to about 20 knots, according to Mr Aponte, which is less economical and also more polluting. And if ships are running late, they may have to go even faster to get back on schedule.

MSC, which operates the world’s second-largest containership line behind Maersk, has a fleet of almost 500 vessels with a combined capacity of 3.3m teu, according to Alphaliner. It includes a large number of 20,000 teu Oscar-class vessels, and more in the pipeline. The privately owned carrier recently ordered a series of 11 ships of 23,000 teu intake.

However, it is this new generation of megaships that are causing many of the problems, Mr Aponte conceded during an interview at MSC’s Geneva headquarters, with some ports struggling to handle them efficiently and so creating schedule delays.

MSC embarked on its latest newbuilding programme for “strategic and tactical reasons,” he said, with the line needing to step up and maintain scale against competitors that were expanding through acquisitions.

Maersk recently bought Hamburg Süd, CMA CGM took over APL, while Cosco is about to finalise the purchase of OOCL. MSC, on the other hand, has always grown its containership fleet organically, a strategy that looks set to continue.

But it is the larger ships, of which MSC already has a sizeable number, that are contributing to a decline in service quality.

“As vessels get bigger and bigger, ports are becoming more congested,” said Mr Aponte, with bunching becoming an extra headache as vessels wait to berth. They are also hard to manoeuvre in port, while many terminals are stretched to the limit.

At the same time, there appear to be more weather-related delays and other hindrances such as night-time restrictions, particularly for the big ships, that are making it increasingly difficult for lines to maintain performance levels, either in the north-south or east-west trades.

“We need to do a lot of schedule repairs and make other contingencies that are costing a fortune,” said Mr Aponte. And if ships accelerate to 20 knots or more from the optimum 18 knots design speed to catch up after a delay, that just adds to the cost.

In future, MSC ships will be travelling a little slower, said Mr Aponte, “but we will be giving our clients a reliable and sustainable service”, while also being more ecological through speed reductions.