It was a more positive week for VLCC owners, with heightened enquiry preventing sentiment from easing. The WAF and USG markets were particularly busy, providing a constant back up option for modern tonnage ballasting back from the East, whilst there was also a steady flow of cargo from the MEG which further supported rates.

The Suezmax market was given an injection of life this week, with firming Aframax rates in the Med resulting in Suezmax owners covering  Aframax stems in the region in search of higher earnings. The positive sentiment had a knock-on effect in WAF, where rates rose, whilst in the MEG rates were generally steadier.

It was an exciting week in the Med/Black Sea, where a constant flow of fresh enquiry on top of an already finely balanced tonnage list quickly saw rates rise substantially, with rates on cross-Med routes rising to around WS 165. It was also busy in the North Sea/Baltic, although the market in the region was not as firm as in the Med. 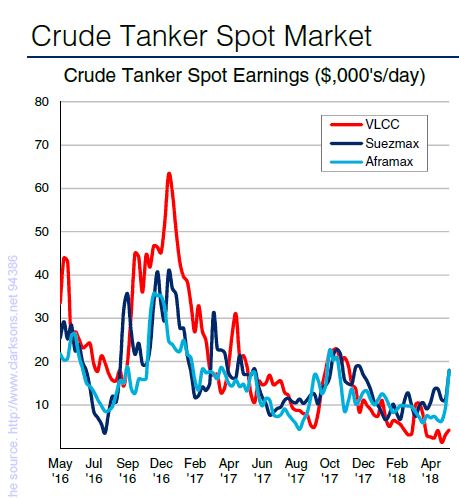 West of Suez: In the MR market, an increase in fresh enquiry led to the rate on the UKC-USAC route rising from WS 120 to WS 150. The LR1 market saw plenty of activity, although this wasn’t enough to clear up the free tonnage currently preventing rates from creeping up. 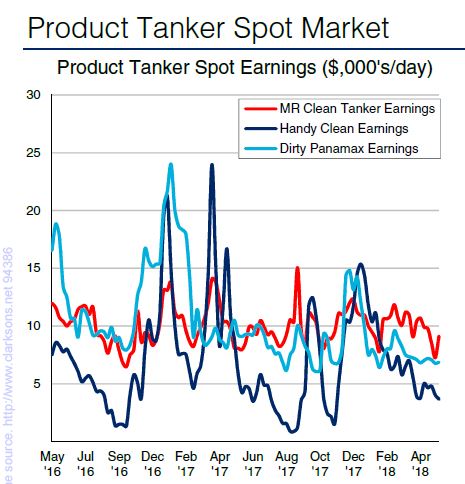 Capesize rates softened further this week, as the list of available tonnage for June loading in Brazil continued to grow. The spot rate on the Tubarao-Qingdao route fell to $16/tonne, while average Capesize spot earnings fell 30% w-o-w to $8,934/day

Panamax spot rates generally softened in both basins this week, with sentiment in the sector remaining negative. Rates in the Pacific were undermined by a shortage of fresh cargo availability in key load areas, particularly out of Australia. In the Atlantic, long tonnage lists weighed on rates despite a slight increase in cargo enquiry towards the end of the week. 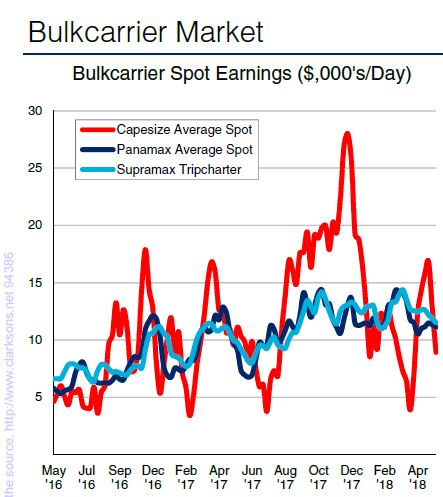 In the bulkcarrier sector, Taizhou Sanfu has received an order for 1 + 1 x 64,000 dwt Ultramax bulkers from Bangladeshi owner Meghna Marine, with the firm unit scheduled for delivery in 2020. Elsewhere, Chengxi Shipyard has received a contract for 1 + 1 x 40,000 dwt self-unloading bulkcarriers from Canadian owner CSL Group. The firm vessel isscheduled for delivery in 2020.

Despite the month of Ramadan being fully underway, there is still healthy competition in the market. Indian breakers are generally the frontrunners for any available units, apart from larger tankers. The market has remained stable, and current price levels appear to be at a happy medium for both sellers and buyers. 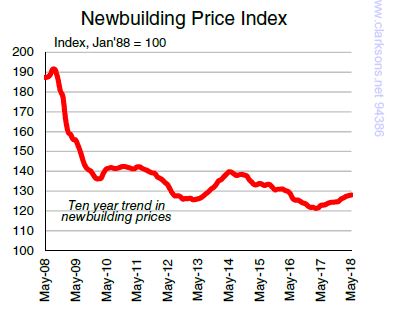