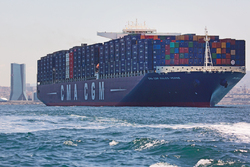 The world’s third-largest box carrier dips to a net loss of $77m in January-March despite higher revenue and transported volume. The results were hit by sharp increases in bunker prices, says chairman and chief executive Rodolphe Saadé

According to MANA, CMA CGM, the world’s third-largest box carrier, slipped into the red in the first quarter on higher bunker costs despite increases in revenue and volumes transported.

The French carrier recorded a net loss of $77m in January-March, compared with a net profit of $86m in the year-earlier period.

“The shipping industry is experiencing sustained growth but was hit in the first quarter by the sharp increase in bunker prices,” the company's chief executive Rodolphe Saadé said in a quarterly report.

“In this environment, CMA CGM succeeded in recording a strong increase both in volumes transported and in revenue, while maintaining a positive core EBIT [earnings before interest and tax] margin. Volumes should remain high throughout the year.”

Moreover, it is following other carriers in dealing with increasing bunker costs by implementing emergency bunker recovery measures to offset the rise in fuel prices not factored into the freight rates.