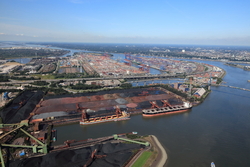 Germany’s Port of Hamburg saw a 7.5 percent decline in its total throughput during the first quarter of this year.

Total throughput dropped to 32.7 million tons in Q1 2018 from 35.4 million tons recorded in the corresponding period a year earlier, MANA correspondent reported.
As explained, this year’s Q1 throughput was notable for a rise in conventional general cargoes, a lower figure of bulk cargoes, a stable trend in container handling and distinct growth on container transport services by rail.
General cargo throughput stood at 22.7 million tons in Q1 2018, a decrease of 1.8 percent year over year. In addition, bulk cargo throughput was 10 million tons, down 18.2 percent year over year.
Conventional general cargo throughput rose by 14.3 percent to 370,000 tons in the first quarter of 2018, maintaining the upward trend started in the fourth quarter of 2017.
Container handling in the first quarter of 2018 remained stable at 2.2 million TEU — down by 1.9 percent than in the comparable period of the previous year.
The first-quarter trend for total seaborne container throughput of loaded boxes in Hamburg was once again positive and stood at 1.9 million TEU — up by 0.7 percent.
By contrast, handling of empty boxes was again lower. The first-quarter throughput of these in Hamburg totaled 252,000 TEU, a downturn of 18 percent.
“A glance at handling trends for first-quarter handling of loaded and empty containers indicates that on the one hand, the Port of Hamburg still continues to gain cargoes, but on the other has to accept a sharp drop in the volume of empty containers. Against the background of the not yet implemented adjustment of the fairway of the Lower and Outer Elbe, shipowners are primarily using their slot capacities on ULCVs calling at Hamburg for loaded boxes,” Axel Mattern, Joint CEO of Port of Hamburg Marketing, said.
On the main sea trade routes, Hamburg’s container services with North America East Coast, Eastern Europe (Baltic) and India/Pakistan are still subject to downturns, according to the port. Among the trades where container services performed distinctly better than in the first three months of the previous year were East Asia (North), South America East Coast, North America West Coast, and North East & West Africa.
“China is by a wide margin the Port of Hamburg’s most important trading partner. We can report a distinct advance of 4.5 percent in container traffic with the Peoples’ Republic. Substantial growth also occurred on container services with Brazil (up 37.7 percent), Sweden (up 38.5 percent) and Israel (up 63.8 percent). New or expanded liner services between Hamburg and these countries are one reason for the positive trend,” Ingo Egloff, Joint CEO of Port of Hamburg Marketing, explained.
0
Tags: port hamburg 2018 container volume throughput
Visit Home
Send to friends
Print
Newsletter
Share this news