VLCCs: There has been no real change in fundamentals this week, with the position list oversupplied despite markets remaining relatively busy. Although owners have been a little more confident lately, charterers started to chip away at rates this week, with up to 13 offers for some enquiry.

Capesize: The Capesize market maintained its recent positive momentum this week, with spot rates rising further w-o-w in both basins. The spot rate on the Dampier-Qingdao route stood at $8.25/tonne at the end of the week, while average Capesize spot earnings reached $16,822/day, the highest level seen so far this year.

Activity on the European containership charter market was relativelysubdued this week, on account of the two public holidays which took place, although this effect was not as pronounced as has been seen in previous years. In the wider market, fixture volumes for the larger charter market sizes were limited, although a number of transactions currently on subjects are expected to be concluded early next week. A new record for the year so far was set for ‘old Panamax’ tonnage in Asia this week, with larger examples commanding rates in excess of $13,000/day.

Meanwhile, a number of new fixtures were reported this week in the 2-3,000 TEU ‘feeder’ sector, following relatively limited activity a week prior. Modern c.2,700 TEU tonnage is commanding premium rates, with fixtures in excess of $12,000/day reported this week, and rates for less economical units a little lower. Further charter market activity in the smaller ‘feeder’ segments is expected to come to light in the coming weeks. 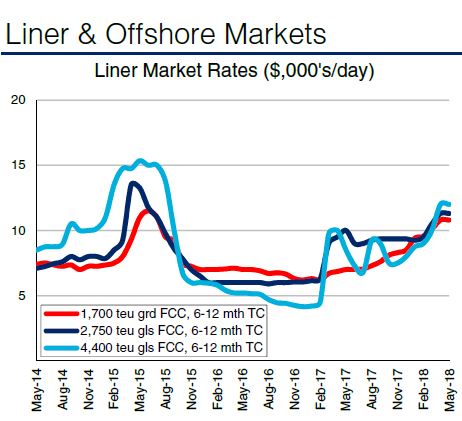 It was a quiet week in the newbuilding market with only a couple of orders to report. In the tanker sector, Hyundai Mipo Dockyard (HMD) have won a contract from Clients of Niovis Shipping for 1 + 1 x 50,000 dwt MR Tanker. The firm vessel is scheduled for delivery in 2H 2019 from HMD’s Ulsan facility.