A total of seven incidents of piracy and armed robbery against ships were reported in Asia - five actual incidents and two attempted incidents - in January 2018, compared to 16 incidents reported in December 2017, according to regional piracy watchdog ReCAAP ISC. 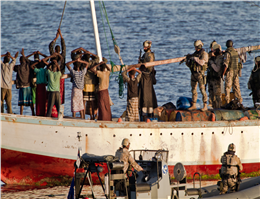 Out of the seven reported, five were actual and two were attempted incidents. One of these was a piracy incident and six were armed robberies against ships, MANA correspondent reported.
Five incidents occurred on board ships while at anchor/berth, specifically at Muara Berau (East Kalimantan, Indonesia), Manila (Philippines), Cam Pha (Vietnam) and the South China Sea.
The two incidents on board ships while underway occurred off Alang, Gujarat (India) and off Pulau Karimun (Straits of Malacca and Singapore).
There were two reports of arrest of perpetrators and recovery of stolen data-x-items by the Philippine Coast Guard (PCG) and Indian Coast Guard (ICG).
Compared to December 2017, when a total of 16 incidents were reported, the situation in January 2018 improved. Year-on-year numbers were also down from 10 incidents reported in January 2017, data from ReCAAP shows.
As of January 2018, nine crew is still being held in captivity. The Philippine authorities continued to conduct pursuit operations and intensify its military operations to rescue the abducted crew and neutralise the militant group.
The ReCAAP ISC advises ships transiting the areas of concern to exercise enhanced vigilance, maintain look-out for suspicious approach by boats, report all incidents to the nearest coastal State and flag State immediately, keep abreast of the latest situation and implement preventive measures recommended in the Regional Guide to Counter Piracy and Armed Robbery against Ships in Asia.
0
Tags: piracy Asia 2018 ReCAAP
Visit Home
Send to friends
Print
Newsletter
Share this news