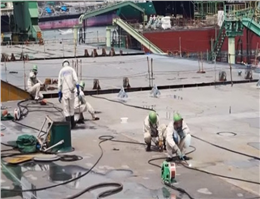 Minaminippon mainly builds and repairs tankers and vehicle carriers. It has annual sales of about $180 million, MANA correspondent reported.
Minaminippon's shareholders include Mitsui Engineering & Shipbuilding and Mitsui O.S.K. Lines.
Competition from Chinese and South Korean yards has led to a number of alliances and operational changes in Japan over the last year.
In December last year, Kawasaki Heavy Industries indicated it will step up its commercial shipbuilding operations in China and reduce production in Japan. Specifically, the yard will boost capacity at a facility in Dalian that is jointly operated with COSCO.
In June last year, Mitsubishi Heavy Industries reached an agreement with Oshima Shipbuilding to form a commercial shipbuilding alliance. The agreement established a technical alliance to focus on the development of new ship designs and technologies, standardization of design and construction and efficient shared use of tools and equipment. The alliance followed on from a previous agreement reached at the end of March last year between Mitsubishi Heavy Industries, Imabari Shipbuilding and Namura Shipbuilding.
0
Tags: japan Imabari 2018 Shipbuilding
Visit Home
Send to friends
Print
Newsletter
Share this news