In the past few years, digitalization has gained momentum and today, the digital transformation of assets, information flows and port activities is one of the greatest changes in shipping industry, on the other hand, security emerges as a key property needing attention in order to control operational and safety risks. In other to collect more on this issue, MANA correspondent has conducted an exclusive interview with Mr. Axel Mattern. CEO, Port of Hamburg Marketing, the transcript of this interview could be accessed in the following. 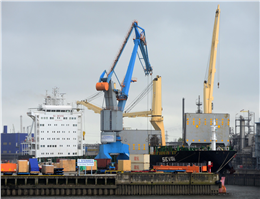 ؟What are your views regarding the collaboration history of IRISL and Hamburg Port
Germany is traditionally Iran’s largest western trading partner, and Hamburg, as Germany’s largest seaport, has always played a key role in the relationship of both countries. Hamburg has been the location of the Consulate General of the Islamic Republic of Iran since 1858. For generations, very close and friendly relationships have been maintained in Hamburg with companies and state organizations in Iran. Even the trade sanctions between 2009 and 2016 could not break this narrow band. After easing of the economic sanctions, IRISL started a container service (ECL Europe Container Line) in March 2016 connecting Hamburg and the Persian Gulf. Just a month later, a multipurpose service followed. Well-established business relationships, such as between IRISL, the Hamburg shipping agent Peter W. Lampke (PWL) and the terminal operator C. Steinweg (Süd-West Terminal), came to bear again. Since then, the cargo volume developed very positively. From 2015 to 2016 the container volume between Hamburg and Iran increased from 600 TEU to more than 11,700 TEU. In the first three quarters of 2017 the volume grew up to more than 16,000 TEU. And that’s just the beginning. There is still a lot of potential to be expected.
Given that IRISL’s history has reached its 50th year, what are your view regarding this line?
IRISL is the state shipping company of one of the largest economies in the Middle East. The country has a huge economic and infrastructure pent-up demand. This offers great potential for IRISL. The opening of the Iranian market has also increased the number of competitors. Many international shipping companies are now operating again at the Iranian coast. Therefore, the investments IRISL is making in expanding its fleet to remain competitive are hugely important. The development shows that IRISL is on the right way. Even if the cargo potential of Iran is still far from exhausted and the port infrastructure needs to be expanded, IRISL has already established itself among the top 25 container shipping companies in the world, with a clear upward trend.
What are the most significant (positive) impacts of using smart technologies in Hamburg Port’s activities and performance?
With the current possibilities of fast growing technologies like Internet of Things, Big Data, Artificial Intelligence, Virtual and Augmented Reality, Drones, Blockchain, etc., we see a lot of potentials that many processes within the port could be managed differently, or totally redesigned for much better efficiency today. Thanks to its smart PORT philosophy, the Hamburg Port Authority is achieving sustainable economic growth and maximum benefit for its customers and the people of Hamburg, while minimizing its environmental impact. In addition, smart PORT is constantly being developed and adapted.
What major challenges did you face while establishing and implementing smart technologies?
Since 2013 we have been prototyping and implementing new technologies in our port for us and for our customers. The smartPORT Hamburg Initiative was founded in order to bundle and coordinate the realization of the vision “Port of the Future” of the Hamburg Port. Until today more than 30 projects were finished. Some were totally successful, some were failed. We do these projects with agility. When we fail, we think of new ideas or solutions and try again. This “trial-and-error” seems to be so unconventional for an organization like Hamburg Port Authority. But we have a lots of learnings out of them which we can profit for our journey to become one of the most intelligent seaports of the world. When did Hamburg Port began the process of using smart technologies? When was the need for applying smart technologies felt? When was this process operationalized? 2013 was the start of the official smartPORT program. Our biggest challenge therefore is how to sustainably grow in volume without requiring more space and without compromising with the ecology, so that the port as the part of the city could still be accepted by the citizens of Hamburg. This can only be achieved with intelligent technology.
What tips and guidelines can you offer to other ports who intend to set Hamburg Port as their role model?
A clear vision is needed. It is important to tell a holistic story and reduce complexity by dividing the vision into many small projects.
What impacts do smart containers have on the embarking and disembarking processes at Hamburg Port?
Smart containers can significantly increase the efficiency of embarking processes in the Port of Hamburg. Significantly more information about the container is available to help in the intermodal transport. In the future, the smart container may also be able to find its best way on its own.
What are the main upsides and downsides of smart containers?
Advantage: more information, greater transparency, faster routing, better understanding of the requirements of the customer and thus the possibility to respond to specific customer requirements (new business models and services will emerge). Hacker attacks and thus increased demands on cyber security.
And the last question, how do you make sure of the security of mobility equipment and operations at Hamburg Port against the attacks from Hackers?
Business critical processes of customers in the Port of Hamburg area are becoming more and more dependent on IT systems. Therefor we are utilizing state-of-the-art IT security methodologies and collaborate with other international Port Cyber Security Centers. Besides that it is important to raise awareness at all levels, from board room to control room in a ship.
0
Visit Home
Send to friends
Print
Newsletter
Share this news