<![endif]--> We Are to Enhance Digital Cooperation with IRISL

We Are to Enhance Digital Cooperation with IRISL

South Korean KR CEO said: "we enjoy very good and strong ties with Iranian companies and we also have an agency office in Tehran". 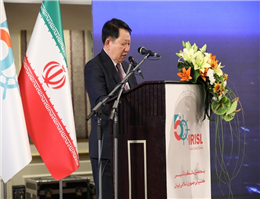 The CEO of KR Korean Register company in 50th anniversary ceremony of IRISL foundation congratulated this occasion and Announced: during the sanctions era that Iranian companies encountered difficulties, KR could continue its providing services due to the confidence existed between the two nations.
Referring to the summit held in November 2017, he declared that we planned to develop the technology of smart ships by the future five years because digital technology could change shipping industry. Meanwhile, KR tries to exploit autonomous ships and it considers cyber security.
At the end of his announcement, he added: we are delight to extend our cooperation with IRISL in the realm of digitalization in shipping industry and its securities".
0
Tags: IRISL cooperation Korean Register Digitalization smart shipping
Visit Home
Send to friends
Print
Newsletter
Share this news