Shipping Shipping
A
News ID: 77638 |
Minister of Industry, Mine and Trade Announced:

Minister of Industry, Mine and Trade said: "Islamic Republic of Iran Shipping Lines (IRISL) stood strongly against national crisis and was in a through service of the country's economy", MANA correspondent reported. 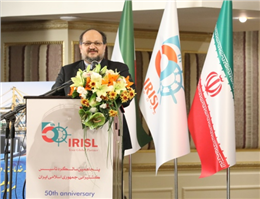 Referring to 30 years of collaboration with IRISL, Mohammad Shariatmadari in 50th anniversary of IRISL foundation announced that it a great honor to participate in this great ceremony to celebrate IRISL's entrance to 51 years of experience. The group has provided valuable services for Iran and International economy during the five decades of its activities.
Considering the country's marine history, he said; the ancient marine document of Iran came back to six thousand years ago that demonstrates the historical capability of Iranians in marine industry and shipbuilding.
This official figure further pointed out the presence of Iranian in international waters, which is long lasting and honorable and declared that, Iranians established the basis of marine culture in Islamic civilization.
Considering the foundation of IRISL in 1961, the Minister said: after the victory of Islamic Revolution, the company hastened its growing trend and during the Imposed War, it could defend the country.
The member of the 12th Government referred to the innate potentials of the country in transportation and marine transportation in particular and continued: the government should pay severe attention to IRISL's key role in world and region transportation. To do so, we need policy and appropriate management as well as proper exploiting of marine and port potentials of the country. Meanwhile, creating harmony and coherence among different sectors would lead to the revival of the country's potentials once again in marine sector.
Given the statement of the Supreme Leader, he added that IRISL and NITC as the largest carriers of Iranian commodities have to take measures to develop marine industry and shipbuilding sector.
The Minister of Industry, Mine and Trade referred the trade policy of the 12th Government and said: exploiting the capacity of large ports such as Shahid Rajai and Shahid Beheshti comprehensively would lead Iran to be the center of goods distribution in the region and international arena.
0
Tags: IRISL trade marine transportation
Visit Home
Send to friends
Print
Newsletter
Share this news