<![endif]--> By Putting this Port into Operation, Goods will be Delivered to Neighbouring Countries in a Shorter Time and Lower Price

By Putting this Port into Operation, Goods will be Delivered to Neighbouring Countries in a Shorter Time and Lower Price

President Rouhani told reporters after putting Phase 1 of Shahid Beheshti Port Development Plan into operation: "The North-South Corridor is very important for the region and the world and today, we are happy that its first phase has been put into operation and we hope that we can construct the other phases as soon as possible". 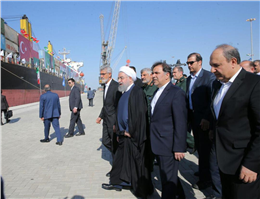 Speaking on Sunday in Chabahar, Sistan and Baluchistan province, Dr Rouhani added: "This port has a special position and situation, which can shorten the North-South Corridor and connect it to the ocean".
Stating that other international south-north corridors will end in the Persian Gulf, he said: "This corridor is and its operation is very important for the economy".
The president said: "Neighbouring countries east of Iran, like Afghanistan and our northern neighbours in Central Asia are linked to southern Iran and the open waters and the ocean through this corridor, and this matters politically to us and will develop our relations with eastern and northern countries and even Europe in the future".
He also said that the operation of this port is very important for Sistan and Baluchistan province, adding: "Connecting the nationwide railway to Chabahar can also create an even better condition for this region".
"In designing this port, five piers will be put into operation and more than 200 hectares of new land will generate employment for the people of this province and also bring Iran closer to other countries," the president continued.
0
Visit Home
Send to friends
Print
Newsletter
Share this news