THE trend toward liner shipping consolidation will continue and these “small and beautiful” companies are likely to become the next prime takeover targets, according to Drewry China director Han Ning. 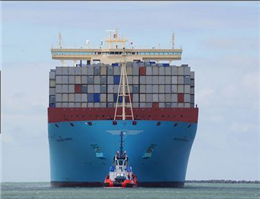 According to MANA,compared with the previous rounds of consolidation before 2015, this time round the acquirers, including Maersk Line and Cosco Shipping, appear more proactive.
They are keen to reduce the number of shipping lines to improve capacity management and support vessel utilisation level up to 90%, especially when faced with a huge order book of megaships to be delivered over the next two years.
The remarks were delivered when Ms Han spoke to the 2017 International Shipping and Finance Forum co-organised by ship.sh and BIMCO in Shanghai on Friday.
To use Ms Han’s phrase, these “small and beautiful” companies refer to the small-and mid-sized carriers, which can provide acquirers with a substantial supplement in capacity and networks on certain trades. This can create greater synergies.
A good example is Orient Overseas International Ltd. This has helped to give large expansion to the presence of Cosco Shipping on Asia-India Subcontinent routes, northeast Asia to Oceania services and North Europe-North America trades.
Other carriers she also classified under this umbrella were mostly regional-focused players, including Pacific International Lines, Wan Hai Lines and SITC.
Despite denials from Pacific International Lines about any acquisition talks, Ms Han said the Singapore-based carrier’s stronghold in Africa was a good set of assets for any shipping line that covets the market.
What is more, she pointed out that Hapag-Lloyd could also be a potential takeover target after it completes its internal integration with United Arab Shipping Co, while Evergreen Marine would need to ruminate on its middle to long-term destination as well.
Megaship delivery concerns
Ms Han’s prediction comes as the market is facing another round of pressure on supply, with the looming delivery of numerous big ships.
According to Drewry’s estimate, 128 megaships exceeding 10,000 teu are scheduled for delivery by 2020. Of these, 83 units are expected to be delivered by next year. Of the 83 ships, 24 are ultra-large containerships above 20,000 teu.
The wholesale entry of those leviathans will lead to the upsizing of vessels on almost all trade routes. Their arrival may reduce the number of transpacific services from 37 to 31.
The issue of whether there would be more megaship orders was foremost among the major risks that might dampen shipping lines’ longer-term prospects, Ms Han argued.
Although the industry has in general stayed calm on ordering — despite the recent deals signed by CMA CGM and Mediterranean Shipping Co — there might be new players, such as SM Line, to challenge the status quo.
Having risen from the ashes of Hanjin Shipping, it was possible the Korean carrier would be the next buyer of ULCs to meet its desire for fast expansion, Ms Han added.
She remained optimistic about freight rates next year, owing to robust economic growth across the globe.
With two months left in 2017, Drewry expects the average unit freight rate of the whole-year on East-West trades to increase by 16.6% from 2016, and to move up 8.8% in 2018 from this year
0
Visit Home
Send to friends
Print
Newsletter
Share this news