<![endif]--> The Ballast Water Management Convection and its Impacts on the Shipping Industry

Head of Iranian Research and Development, Sina Ports and Marine Services Co, Mehdi Rastegary stated: By the rise of global dependence on the maritime transport in the past decades, shipping is seen as one of the most essentially needed industries for sustaining human life on the planet.

E. Mitropoulos once said: ‘Without shipping, half the world would freeze and the other half would starve.’ In other words, with dependence of 90 percent of international trade on the shipping, our globalized world cannot be perceived without it. Although shipping is seen as one of the most environment-friendly modes of transport, the scale and scope of activities in the industry amasses the large magnitude of the environmental aspects and impacts of it on the worldwide scale. This has raised global concerns on several environmental aspects of shipping and their consequences in terms of pollution control and environmental resources management. Yet, the industry is standing on the horns of a dilemma: on the one hand, the shipping shall take immediate and effective measures to keep itself in the track of sustainable development. On the other hand, in the current deteriorated markets, the expenses of environmental measures seem like a hefty burden to the firms in the industry. Among the critical aspects of the shipping industry, Ballast Water Management (BWM) has proved to have significant impacts on ecosystems, food chains and people’s way of life. It is estimated that the merchant shipping transfers 3-5 billion tons (equivalent to 3-5 trillion liters) of ballast water throughout the world annually. Ships are largely dependent on ballast water and they are designed to carry huge amounts of ballast water. The following table provides the ballast water capacity of various types of ships as a percentage of their DWT.

The ballast water is a key element in keeping the ship’s stability and seaworthiness. The Ballast waterfunction is most important in cargo loading and unloading operations in ports where the ship’s stability is maintained by deballasting and ballasting. These operations are also practiced for navigating in shallow water areas, raising the vessel’s bow for sailing in storms, trimming the stern to balance the fuel consumption enroute , lowering the airdraft of vessel in certain operations, and minimizing hull tensions. In terms of biosecurity, the ballast water in maritime transport can act as a vector for conveying Harmful Aquatic Organisms and Pathogens (HAOPs) from one part of the world to the other parts. The HAOPs include pathogens, planktons, algae, eggs, larva, or other organisms that if introduced to the marine environment or the fresh water resources can hazard human health, property, environment, biodiversity, or other legitimate use of such areas. HAOPs come in large quantities and variety in the ballast water and can contribute towards loss of marine species, harms to the food resources of human or marine species, and health risks for human from contamination of water to food chains. 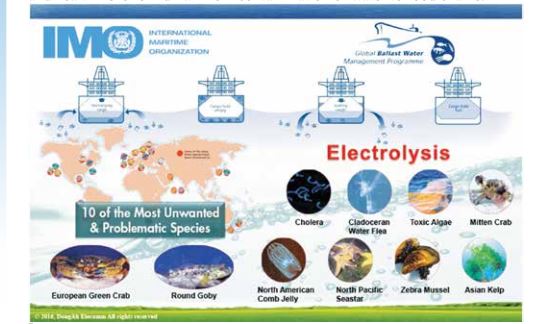 Among the historically environmental disasters caused by HAOPs we can point to:
• Outbreak of golden mussels in South America and its devastating effects on fisheries (since 1990s);
• Spread of Mnemiopsis leidyi (comb jelly) in the Black Sea Azov, Marmara and Eastern Mediterranean and its contagion to the Caspian Sea and its tragic effects on marine ecosystems and fisheries ( since 1982);
• Release of Vibrio cholera from Ballast water to drinking water resources in Peru that was accompanied by an epidemy of cholera that infected one million people and killed 10,000 people (1991); • Deterioration of food webs by spread of Zebra mussel in Great Lakes ( since 1980s). The containment of ballast water risks has been a significant issue at the international level for decades and a great number of legal instruments and initiatives have been developed to address it, including:
 The Convention on Biological Diversity (CBD) has been adopted and practiced by UNEP members since 1992 to address the protection of biodiversity in ecosystems. In 1995, the contracting parties to CBD also adopted the “Jakarta Mandate on Marine and Coastal Biological Diversity” which included the introduction of alien species as a thematic issue.
 IMO has raised the issue since 1973, the year of adoption of MARPOL convention, by pointing to the potential presence of pathogens in the ballast water in her resolution and requesting the joint study of WHO and IMO on the issue.
 Later in early 1990s, IMO organized a Ballast Water Working Group under the Marine Environment Protection Committee (MEPC) that has been continuously working to address the issue effectively. In 1991, the working group published Guidelines for Preventing the Introduction of Unwanted Organisms and Pathogens from Ship’s Ballast Waters and Sediment Discharges, and updated it in 1993. In 1997, it published the ‘Guidelines for Control and Management of Ships’ Ballast Water to Minimize the Transfer of Harmful Aquatic Organisms and PathogeFollowing her work on the issue, IMO prepared the Ballast Water
 Management (BWM) convention, which was adopted in February 2004. Further, IMO adopted over 15 sets of guidelines and other documents contained in its Marine Environmental Protection Committee (MEPC) resolutions and circulars.
 IMO also participated in launching the GloBallast initiative with Global Environmental Facility (GEF), and UN Development Program (UNDP) in 2000. The Globallast program has acted towards making a global momentum in implementing IMO ballast water guidelines, reducing the transfer of HAOPs in ships’ ballast water, and preparing for implementation of BWM convention in the past 17 years.
Ballast Water Management Convention
After decades of international concern and follow-up of ballast water issues, the Ballast Water Management Convention will eventually come into effect in September 2017. This convention that enjoys the accession of 58 parties and involvement of more than 35 percent of the global merchant shipping tonnage, requires all ships of 400 gross tonnage and above (including existing ships, except floating platforms, FSUs and FPSOs) to possess International Ballast Water Management Certificate (IBWMC). This is an important milestone in terms of global biosecurity.
As a groundbreaking legal instrument, the BWM convention involves the interplay of coastal states, the port states and the flag states in their regulation on the Ballast Water issue. It is expected that the synergistic resultant of such regulation and enforcements can drive the merchant shipping towards mitigating the adverse impacts of ballasting throughout the world. Ballast Water Management Convention (2004) structure Sources: IMO (2005), Lloyd’s Register (2014),American Bureau of Shipping (2017).
0
Tags: Ballast Water Management Convection shipping industry impact
Visit Home
Send to friends
Print
Newsletter
Share this news