The European Union gave 46 million euros ($54 million) to Italy on Friday to help it protect Libya's northern and southern borders, part of the bloc's efforts to stem arrival of African migrants across the Mediterranean. 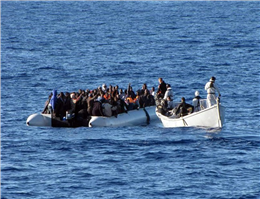 According to MANA, Nearly 95,000 people reached Italy this year, embarking on smugglers' dinghies from the shores of the lawless Libya.
Rome plans to send navy vessels to Libyan waters next month to combat human trafficking, as well as looking to strengthen Libya's southern border, which many migrants cross on their way.
The EU has already deployed its mission further north in the Mediterranean and donated 90 million euros to improving living conditions for migrants stranded in Libya, as well as helping them get back home further south in Africa, to dissuade them from daring the deadly sea passage to arrive in the bloc.
It is supporting the U.N.-recognized government of Fayez Seraj in Tripoli, as well as training and equipping his coast guard to have it intersect migrants and put them back on shore.
Arrival figures show little to no sign that the EU strategy has worked so far.
Italy - Libya's former colonial master and the main gateway to Europe now for Africans - is increasingly under pressure and has resorted to more bilateral deals with Libya without waiting for the rest of the EU to follow.
A senior EU official hoped, however, that the combined 136 million euros, and Italy's own endeavors will together eventually lead to lower arrivals in Europe, which has turned increasingly cold to accepting refugees and migrants.
0
Tags: Migrants
Visit Home
Send to friends
Print
Newsletter
Share this news