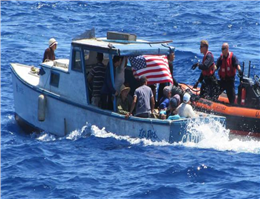 "Wet foot / dry foot" was a continuation of the Cuban Adjustment Act, which allowed permanent residency for Cuban nationals intercepted in U.S. waters, MANA correspondent reported.
It was conceived at the height of the Cold War as a way to protect opponents of the Castro regime, and was modified under President Bill Clinton to allow residency for Cubans who made it to U.S. shores ("dry feet") but to deny it to those intercepted at sea ("wet feet").
The policy was a source of friction with Havana, and its discontinuation was one of the many measures the Obama administration took to improve relations with Cuba.
Since “wet foot / dry foot” ended, the number of at-sea interdictions has fallen from 25 per day to just 20 per month, according to Coast Guard Sector Key West spokeswoman Lt. j.g. Kate Webb. The favored mode of transportation has also changed: the migrants have taken to using speedboats rather than rustic or improvised craft, and the cost of the crossing has gone up dramatically.
In early April, the Coast Guard said that it had intercepted over 100,000 Cuban migrants in FY 2016. Towards the end of the year, the migration flow took on an air of desperation.
0
Tags: Cuba Migrants 2017 America
Visit Home
Send to friends
Print
Newsletter
Share this news