After the Baltic Dry Index (BDI) had its seasonal weakness around the Chinese New Year in early February, stronger-than-expected demand came from across the board and lifted freight rates, says BIMCO market analysis of Dry Cargo. 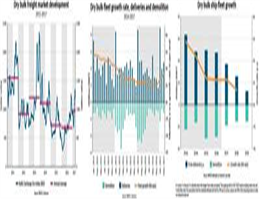 This brought earnings into profitable levels for a couple of days, as the BDI passed 1,282 on 27 March 2017, MANA correspondent reported.
If earnings are at profitable levels now, how come BIMCO’s Road to Recovery keeps mentioning 2018 and 2019? That’s because it focuses on full year profits for all dry bulk segments. That would require a full year where the average BDI is above 1,280. Last time we had that was in 2011. Note that the BDI average for Q1-2017 was 945.
BIMCO sees the current developments as a ‘false dawn’ and reiterate expectations for 2017 as being a loss-making year for the industry as such.
As expected we had the seasonal decline in Q1-2017, but a softer landing was provided for as China’s combined imports of iron ore, coal and soybeans went up by 36.5 million tonnes (19%).
January had more dry bulk capacity demolished than February and March combined. As the BDI moved higher, demolition activity weakened. Higher demolition prices that often follow in the wake of higher freight rates do not sufficiently tempt shipowners to sell for demolition. They either keep trading the ships themselves or sell them off in the second-hand market as asset values have climbed too.
BIMCO’s Road to Recovery, encourages shipowners to make fleet expansions via the second-hand market – and that we have certainly got. But it also builds on 0% total fleet growth, something which can only come around via more demolition.
In nominal DWT terms, the total dry bulk fleet has already grown by 1.5% or 11.7 million DWT in 2017. As the BDI moves higher, demolition activity gets weaker. And the BDI has certainly moved higher during February and March. The subsequent slowdown in demolition activity means that just 4 million DWT has been removed from the fleet so far in 2017.
In comparison, 14 million DWT was demolished during Q1-2016. BIMCO estimates that the supply side will grow by 2.3% for the full year, as newbuild deliveries will slow down and demolition is expected to pick up.
What it could also mean is a return to the shipyards for some of the owners who did not get the ships they were looking for in the second-hand market. So far, we have not seen a flood of new orders, but the shipyard industry certainly stands ready to take owners’ new orders.
For the coming months, April to June, BIMCO expects the demand in the freight market to go higher. Iron ore and soybeans will grow the most, while coarse grains are set to be in lower demand – driven down by low Brazilian exports.
For the supply side of the market, BIMCO expects some steam to come off. We have seen 16 million DWT being delivered in less than three months, out of a total expected amount of 37 million DWT.
0
Tags: Baltic Dry Index dry bulk 2017 scrapping
Visit Home
Send to friends
Print
Newsletter
Share this news