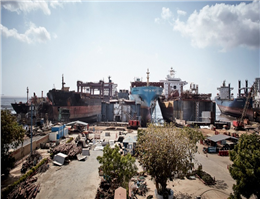 The Maersk group caused controversy when it announced a year ago that it planned to send some of its ships for recycling in Alang despite concerns about the standards applied by companies operating there, MANA correspondent reported.
It is currently close to completing the recycling of two Panamax vessels it sent to Shree Ram in Alang last year and, in recent months, has sent four more vessels for recycling in Alang, two to Shree Ram and two to Lucky Group.
The group is waiting to find out if any of the Alang recyclers succeed in having themselves included on the approved list of the European Union that is currently being prepared.
In the meantime, it says that it has proved in recent months that standards can be raised in Alang and argues that the process of introducing higher standards at recycling yards throughout the zone can be got under way if other owners follow its example.
“To be honest, I don’t think that the heated debate is really helping others to step forward to solve this industry deadlock,” he said, “but we are continuing dialogue with other shipowners.”
“Our suggestion to other shipowners is to join us in Alang and require the same high level that we do,” Kornerup Bang said. “Let them send that signal to Alang because Alang can be transformed.”
NGO Shipbreaking Platform, which has been strongly critical of Maersk for officially taking up a position in favour of recycling in Alang, argues that none of the yards there can meet EU standards, not least because they cut vessels up on the beach and allow the cut blocks to fall into the inter-tidal zone, causing inevitable pollution.
Kornerup Bang said, however, that Maersk and Shree Ram had succeeded in eliminating the dropping of blocks on to the beach with the exception of the bow and stern blocks. And he added that Shree Ram was in the process of equipping itself with a 200-ton crane which would enable it to lift bow blocks in future.
A first list of approved EU recyclers was published by the European Commission in December last year and a second list including non-EU recyclers is in preparation.
0
Tags: maersk Denmark india scrapping Alang
Visit Home
Send to friends
Print
Newsletter
Share this news