China on Wednesday launched its first domestically built aircraft carrier, which will join an existing one bought second-hand, amid rising tensions over North Korea and worries about Beijing's assertiveness in the South China Sea. 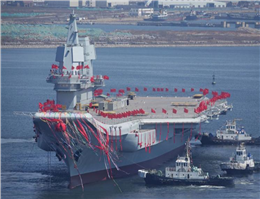 According to MANA, State media has quoted military experts as saying the carrier, designed in China and built in the northeast port of Dalian, is not expected to enter service until 2020, as it will take time to fully kit out and arm.
The launch had been well-flagged as foreign military analysts and Chinese media have for months published satellite images, photographs and news stories about the second carrier's development. China confirmed its existence in late 2015.
The carrier's hull is fully constructed, the official Xinhua news agency said, adding that the propulsion, power and other main systems are in place.
The ship's launch "shows our country's indigenous aircraft carrier design and construction has achieved major step by step results," Xinhua said.
0
Tags: aircraft carrier china launch
Visit Home
Send to friends
Print
Newsletter
Share this news