Two seafarers have been killed after a supramax bulker reportedly suffered an explosion while sailing off Cape Cod in the Atlantic. 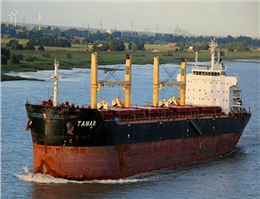 According to MANA, the incident, which happened aboard the 56,600-dwt Tamar (built 2010), has also seen three other seafarers suffered massive burns.The master of the Splosna Plovba-owned ship said the vessel suffered an explosion in its forward storeroom, reports the US Coast Guard (USCG).
The USCG said that the rescue operation is being co-ordinated with the New York Air National Guard as well as the Canadian and Portuguese Coast Guards.
The USCG said the fire resulting from the explosion has been extinguished, but that the cause is as yet unknown.
0
Tags: explosion Bulker
Visit Home
Send to friends
Print
Newsletter
Share this news