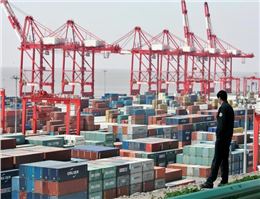 According to MANA, More than 100 container vessels are now waiting outside the port, where the average waiting time at berth last week went up 6.2 percent, to 18.2 hours, versus the previous week, according to shipping software provider CargoSmart.
CargoSmart said the fog started in early April and the congestion had worsened in the past few days, with few clues to when it might ease. Average delays for ships arriving at the port jumped more than 42 percent to 53 hours between April 16 and 18 from the start of the month, it said.
"We are making efforts to adjust and coordinate the entire port's resources and making every effort to provide customers with the fastest service," said a spokeswoman for Shanghai International Port Group, which first flagged the situation last week in a statement on its website.
German container shipping line Hapag-Lloyd told customers in a notice on Thursday that it was monitoring the situation closely and working with the port to minimize delays.
Denmark's Maersk Line, part of A.P. Moller-Maersk, also confirmed that some of its vessels had been affected by the congestion.
Shanghai has been the world's busiest port by container volumes since 2010. It processed 37.1 million boxes last year, up 1.6 percent from the previous year, it said in a stock market statement last month.
0
Tags: shanghai ports
Visit Home
Send to friends
Print
Newsletter
Share this news