The Best is Yet to Come 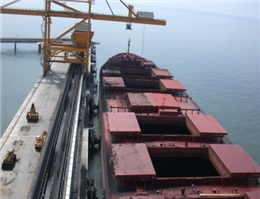 According to MANA, This phenomena rise may have to do with commodity rally seen in the earlier part of 2017, especially on the iron ore and coal prices. By end of February 2017, iron ore prices have seen its zenith for 2017 at $94-95 per mt. Later, the iron ore rally had translated to the rising capesize rates and pushed the overall BDI to hit above 1,000 points in early March.
Since then, the rally in freight rates has carried well into April after a peak of 1,338 points recorded in late March and was hovering around the 1,290 points till now. However on a closer look on the curve, one will realize that the rally is not smooth-sailing with bout of hiccups hampered by natural disasters and port closure.
“A brutal day for the paper market as rates came under pressure throughout the day,” commented a FIS FFA broker on the capesize market at Tuesday, 18 April 2017.
To him, the iron ore market has slumped on the weight of supply overhang and high port inventory of Chinese ports that totaled around 131.44 million tonnes by Thursday, 20 April 2017. Moreover, the closure of Brazil’s Itaguai terminal on 15 April 2017 due to an accident had also placed a negative impact on the capesize market.
Due to these negative market news, the capesize rates had weakened after the post-Easter holidays with spot time charter average rates at $16,154, down $207 on Tuesday. Then, the slide continued with a decline of $630 of capesize rate to $15,524 on the following day.
The downward trend was carried on to the panama market as well, with rates of $12,916 recorded at 19 April 2017, down $71 from Tuesday.
Supramax and handysize rates were in better hands with supramax freight rates achieving $9,741 on Wednesday, up $91 day-on-day, while handysize increased by $69 day-on-day to $8,327 on mid-week.
But well, the best is yet to come, given that there were a few market hiccups occurred in the month of April, from Cyclone Debbie to tighten of credit availability in China. Probably, the month of May will correct every ills that setback April and once again prove that the spring season is typical high demand for freight rates
0
Tags: Dry bulk freight market
Visit Home
Send to friends
Print
Newsletter
Share this news