Two Japanese destroyers on Sunday began an exercise with the U.S. Carl Vinson carrier strike group in the Western Pacific as it approaches waters around the Korean peninsula, Japan's navy said. 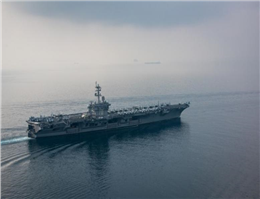 According to MANA, the two Japanese warships, the Samidare and Ashigara, left western Japan on Friday to join the Carl Vinson in a show of solidarity as the United States confronts North Korea over its ballistic missile program and nuclear tests.
Japan's military ordered the warships to accompany the Carl Vinson north at least into the East China Sea, a source with knowledge of the plan said. He asked not to be identified because he is not authorized to talk to the media.
North Korea will mark the 85th anniversary of the foundation of its Korean People's Army on Tuesday. It has in the past marked important anniversaries with tests of its weapons.
0
Tags: Japanese ships US
Visit Home
Send to friends
Print
Newsletter
Share this news