Nearly 9,000 mainly African migrants were rescued in the Mediterranean this past long weekend, after setting out from Libya on unseaworthy boats to try to reach southern Italy and a gateway to Europe, U.N. aid agencies said on Tuesday. 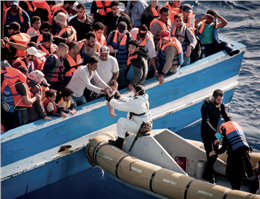 According to MANA, This was an overwhelming search and rescue operation by all sides involved," Babar Baloch, spokesman of the United Nations High Commissioner for Refugees (UNHCR), told a news briefing.
IOM spokesman Leonard Doyle said that better spring weather had encouraged smugglers to take migrants out of detention centers in Libya.
At least 900 migrants have died or have gone missing while attempting to reach Europe by sea so far this year, while 36,000 have been rescued, against 24,000 last year, Doyle said.
0
Tags: Migrants Rescue Vesse
Visit Home
Send to friends
Print
Newsletter
Share this news