China’s shipbuilders have reported a dip in first quarter newbuilding orders and a hike in completed vessel tonnage compared to the year-ago figures, according to statistics from China Association of the National Shipbuilding Industry (Cansi). 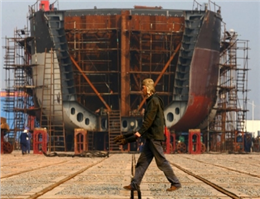 According to MANA, from January to March this year, Chinese shipbuilders recorded 5.54m dwt in new vessel tonnage, a decline of 25.4% compared to the first quarter of 2016, data from Cansi showed.
In completed newbuild tonnage, the Chinese shipyards produced a total of 15.67m dwt of vessel capacity during the first three months, representing a jump of 87.7% compared to the previous corresponding period.
Cansi also monitors 80 main shipyards showing that their combined completed newbuild value came up to RMB85.87bn ($12.47m), down 7.5% year-on-year.
The 80 main yards generated a total revenue of RMB62.4bn in the first three months of 2017, a fall of 9.7% compared to the same period of 2016, and a profit of RMB250m, plunging 63.5% year-on-year.
0
Tags: Chinese shipyard dip
Visit Home
Send to friends
Print
Newsletter
Share this news