[Brief] Just after midnight on April 4, the small freighter Dan Fighter collided with the newly built container ship Maersk Genoa on the waters of the Westerschelde, the estuary leading to the Port of Antwerp. 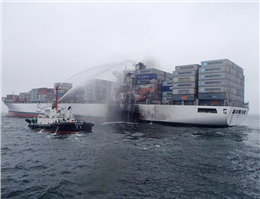 The Dan Fighter was inbound on a voyage from Bilbao and the Genoa was outbound headed for Bremerhaven, MANA correspondent reported.
Under circumstances that are still under investigation, the Fighter made contact with the Maersk Genoa's stern. Dutch media reported both vessels suffered damage, including a crack above the waterline on the Genoa's stern, but there were no injuries, no reports of pollution and no containers lost over the side. The two vessels anchored at Vlissingen to assess the damage.
The 10,000 TEU Maersk Genoa was built last year and began her five-year charter term with Maersk Line in September. The 1,200 dwt Dan Fighter was built in 1988 and is operated by a Danish firm; the Fighter's Equasis record shows that her most recent inspection, at the small UK port of Goole, determined that her steering gear did not meet requirements. She was not detained.
0
Tags: maersk Maersk Line boxship Antwerp collide
Visit Home
Send to friends
Print
Newsletter
Share this news