Australia and Indonesia said on Sunday that full military ties between the two countries had been restored, after Indonesia’s military suspended cooperation in January because of "insulting" teaching material found at an Australian base. 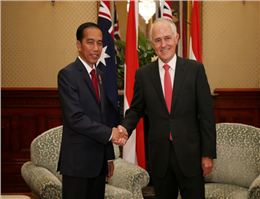 According to MANA, Prime Minister Malcolm Turnbull made the announcement alongside Indonesian President Joko Widodo, who arrived in Australia on Saturday for his first visit as president.
Widodo’s visit to Australia comes less than two months after military ties were suspended, an event that sparked a minor diplomatic spat and led to an apology from Australia’s army chief in February. Military cooperation between the two
“President Widodo and I have agreed to full restoration of defense cooperation, training exchanges and activities,” Turnbull said at a news conference in Sydney.
countries has ranged from joint training and counter-terrorism cooperation to border protection.
0
Tags: Australia INDONASIA
Visit Home
Send to friends
Print
Newsletter
Share this news