The chairman of the International Chamber of Shipping, Esben Poulsson, warned on Thursday that the industry faces the risk of regional regulation of CO2 emissions unless the IMO develops a full global framework. 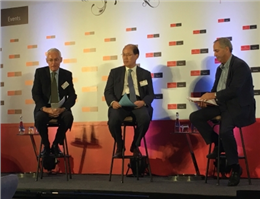 The EU Parliament has already voted to include carbon emissions from shipping within its Emissions Trading System unless IMO takes prompt action on regulation, MANA correspondent reported.
In addition, Poulsson warned that without a global regulatory system, shipping could face additional pressure from regulators in California and Canada, which have also enacted carbon pricing schemes.
“We are confident IMO can adopt an ambitious strategy by 2018 matching the spirit of the Paris Agreement. However, IMO needs to agree a baseline year for peak CO2 emissions from shipping, as well as setting out some serious long term aspirations for dramatically cutting the sector’s total CO2 by the middle of the century," said Mr. Poulsson.
Poulsson also laid out ICS' preferences for IMO carbon regulations: industrywide (rather than per-ship) targets; a mechanism for delivery by 2023, the deadline for avoiding EU regional regulation; and a pricing system based on a bunker fuel tax.
However, while he called for the IMO to take substantial action, he suggested that any targets should also be realistic. “Ambitious CO2 reduction objectives will only be achievable with alternative marine fuels which do not yet exist, although we are very confident that they will be available in the not too distant future," he said.
0
Tags: IMO CO2 CO2 Emission ICS
Visit Home
Send to friends
Print
Newsletter
Share this news