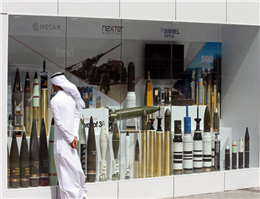 According to MANA, Australia's Defence Industry Minister Christopher Pyne and Sheikh Mohammed, who is also Deputy Supreme Commander of the UAE Armed Forces, met on the sidelines of the biennial International Defence Exhibition and Conference (IDEX) in Abu Dhabi.
The two agreed to consider a 10-year defense plan that could include more than 1 billion Australian dollars ($767 million) in sales to the UAE, Pyne told Reuters.
Sales could include everything from ammunition to large data-x-items such as high-speed support vessels.
"We have very significant capabilities, particularly around coastal protection and surveillance, which I think we should be sharing with our Middle Eastern partners."Pyne,senior Australian government minister told.
0
Tags: ammunition Australia
Visit Home
Send to friends
Print
Newsletter
Share this news