A United States aircraft carrier strike group has begun patrols in the South China Sea amid growing tension with China over control of the disputed waterway and concerns it could become a flashpoint under the new U.S. administration. 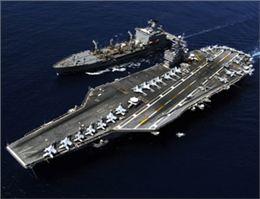 According to MANA, China's Foreign Ministry on Wednesday warned Washington against challenging its sovereignty in the South China Sea.
The U.S. navy said the force, including Nimitz-class aircraft carrier USS Carl Vinson, began routine operations in the South China Sea on Saturday. The announcement was posted on the Vinson's Facebook page.
The strike group's commander, Rear Admiral James Kilby, said that weeks of training in the Pacific had improved the group's effectiveness and readiness.
"We are looking forward to demonstrating those capabilities while building upon existing strong relationships with our allies, partners and friends in the Indo-Asia-Pacific region," he was quoted as saying by the Navy News Service.
Friction between the United States and China over trade and territory under U.S. President Donald Trump have increased concerns that the South China Sea could become a flashpoint.
China wrapped up its own naval exercises in the South China Sea on Friday.
0
Tags: American navy fleet south china sea
Visit Home
Send to friends
Print
Newsletter
Share this news