<![endif]--> China to Suspend all Imports of Coal from North Korea

China to Suspend all Imports of Coal from North Korea

China will suspend all imports of coal from North Korea starting Feb. 19, the country's commerce ministry said in a notice posted on its website on Saturday, as part of its efforts to implement United Nations sanctions against the country. 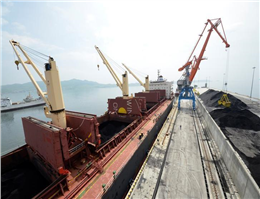 According to MANA, the Ministry of Commerce said in a short statement that the ban would be effective until Dec. 31.
The ministry did not say why all shipments would be suspended, but South Korea's Yonhap news agency reported last week that a shipment of North Korean coal worth around $1 million was rejected at Wenzhou port on China's eastern coast.
The rejection came a day after Pyongyang's test of an intermediate-range ballistic missile, its first direct challenge to the international community since U.S. President Donald Trump took office on Jan. 20.
Despite the restrictions, North Korea remained China's fourth biggest supplier of coal last year, with non-lignite imports reaching 22.48 million tonnes, up 14.5 percent compared to 2015.
0
Tags: coal Bulker china
Visit Home
Send to friends
Print
Newsletter
Share this news