<![endif]--> A Gateway to the Middle East and Central Asia

A Gateway to the Middle East and Central Asia

Chabahr port as one of the important ports of southern Iran is located on the northern coast of the Gulf of Oman. It has crucial functions in Iran’s trade ties due to its strategic location and easy access to international waters. Meanwhile, its proximity to Afghanistan, Pakistan and Middle Asia and future linkage to the country’s railway network will add weight to its position for transportation of goods to aforementioned places. Also, as the sole Iranian ocean port, it serves as a hot spot location and will be crucial to the North - South corridor. Moreover, being on the east-west transit route, the port is of considerable economic and geographical significance in transportation and transshipping. 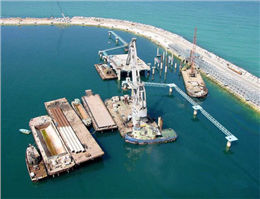 Considering the port’s geographical position, it has capacities for trading, commercial and maritime activities. Following the importance of Chabahar Port’s investment opportunities and existing infrastructures, MANA correspondent intends to provide a brief explanation about each one.
Capabilities and Existing Infrastructures
Iran’s only ocean port, Chabahar Port, is equipped and facilitated with mooring capability for oceangoing vessels. Moreover, hinterland appropriate facilities should be taken into consideration. Having access to vast resources of marine fisheries and aquaculture facilities is still another blooming fact of the port. The shortest ways to link Central Asian countries and Afghanistan as well as the shortest transit route of Iran’s East axis are the other advantages of the port. Last but not least, road, energy and telecommunication infrastructures make the port more robuts.
The Main Focus of Investment
Taking advantage of transit capabilities of East axis (Iran’s Eastern Province, Afghanistan, Central Asia) as a regional distribution network and a transit hub for goods, the capabilities of re-export to regional countries (Oman, Afghanistan, Pakistan), having access to the ocean for ocean-going vessels, being the fifth gas pipeline to India, willingness of neighboring countries and East Africa to invest in the region based on the value chain (tea, rice, dehydrated fruits, etc.) and business development, the government political decision to establish an automotive industry and fishery resources as well as marine aquatics have altered the port to a hot spot place.
Specific Advantages of Chabahar Free Zone
Strategic geographical location near the high seas which was mentioned earlier is one of the specific benefits of the port. Iran’s East Corridor connecting point to the high seas stands at the second step. Easy access to fossil fuels, construction materials and a variety of minerals in Iran’s East is still another particularity of the port.
Legal Advantages for Foreign Investment
Possibility of appropriation of 100% shares of foreign companies, investments guarantee in accordance with FIPPA of foreign investment in Iran, possibility of transferring 100% of capital and profits obtained from the activity of registered foreign individuals abroad, 100% tax exemption on income and capitals for 20 years which is extendable as well as exemption from entering the machines and raw materials for production units from customs duties are all the factors which pave the way for foreign investors.
In addition to the above mentioned advantages, freedom from general import-export regulations of export of each region products, customs exemption on industrial units products of the zone for export to the mainland as much as value added in the use of domestic raw materials, the permissibility of unloading, loading, transit, and transshipment and exemption from customs duties with the exception of the costs of storage and handling, possibility of establishing local and foreign bank & insurance or their branches and issuing six-month visa for foreign investors which is extendable can be taken into consideration in this regard.
It is worth mentioning that the Port consists of two main ports named Shahid Beheshti and Shahid Kalantari.
Chabahar Port’s Performance at A Glance
It’s worth mentioning that India will invest up to $500m (£245m) in a deal to develop Chabahar port in Iran. The development of Chabahar expands a trade route for the land-locked countries of central Asia that bypasses Pakistan. The deal that connects Iran, India, and Afghanistan to central Asia would bolster economic growth in the region.
Tourism Attractions
The existence of natural attractions in Chabahar Port is due to climatic conditions, special geographic position and historical geography combined with tectonic changes and other variables. Chabahar is one of the important archaeological centers in the eastern half of the Iranian plateau and among the rich historical and cultural centers of the country with 156 identified artistic cases 27 ones of which have been registered in the national works list.
Volcanic waves are one of the rare and unique phenomena which are caused by the swings of seasonal winds in summer. Volcanic waves attract the eyes of every tourist in this area.
Rocky beaches have a very spectacular landscape that makes it as an example of the attractive beaches in the northern part of Iran in the form of a natural aquarium full of fish. This exquisite landscape is located there and extends to Govater.
Golfeshan is one of the most amazing geo-tourist phenomenons that have always attracted the attention of geologists and fans of nature. This phenomenon is scientifically called ‘Mud Volcano which can only been found in a few parts of the world.
Carpet of moss is the other natural and geo tourism phenomenon in this area that can be seen in abundance along the coast. This phenomenon results from the chemical and physical erosion that has been active over thousands of years. Carpet of moss is in fact made of lichens that include seaweed and mushrooms.
0
Tags: tourism Chabahar Ports Shahid Kalantari Port Shahid Beheshti Port
Visit Home
Send to friends
Print
Newsletter
Share this news