Around 30 plastic bags were found clogging up the stomach of a 20 foot (6 meter) whale that was put down in Norway last week after failed attempts to rescue it. 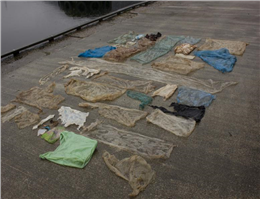 According to Mana, the haul of plastic, which also included sweet wrappers and plastic bread bags, had blocked the Cuvier's beaked whale's digestive system, according to experts from the University of Bergen who found no traces of
food.
"It wasn't like it (the plastic) was in just a part of the stomach; it filled up the whole space," said zoologist Terje Lislevand.
"I think the whale has been in pain. I don't think it's been comfortable to have this in the stomach."
The distressed animal was shot on Saturday after several failed attempts to chase it back to deeper waters near the island of Sotra, in the west of the country.
Lislevand said the longest of the plastic data-x-items found in Thursday's autopsy stretched more than two meters, with the data-x-items coming from several countries.
Experts have long warned that millions of tons of plastic pollution was floating in the northern Pacific Ocean and killing vast numbers of animals.
0
Tags: whale norway
Visit Home
Send to friends
Print
Newsletter
Share this news