The Alabama State Port Authority and the National Port Administration of Cuba signed a five-year, cooperative agreement to collaborate in port and cargo marketing studies and strategies, engage in promotion and exhibition activities, and share data. 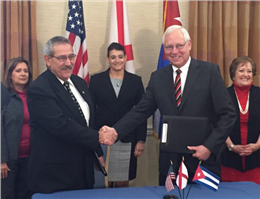 According to MANA, “We are seeing increasing demand for normalized trade between the United States and Cuba, and it is our goal to foster relationships between the ports and their maritime communities to further changes in U.S. Cuban trade policy and facilitate improved ocean carriage services to the benefit of our shippers,” James K. Lyons, chief executive officer of the Alabama State Port Authority, said.
In October 2016, the U.S. Treasury Office of Foreign Assets Control (OFAC) eased the rule that prohibits a vessel that calls Cuba from entering a U.S. port within 180 days of its departure from Cuba.
0
Tags: Cuba Alabama cooperation
Visit Home
Send to friends
Print
Newsletter
Share this news