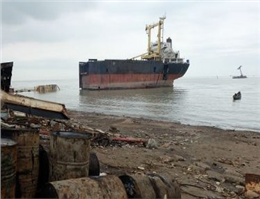 Following two incidents which caused dozens of fatalities, the shipbreaking activities were stopped until proper safety arrangements are made, MANA correspondent reported.
The minister informed that these breaking activities would be banned until further orders, however, dismantling of tankers and LPG carriers which are already at the yards would continue after proper cleaning.
“The two recent catastrophes in the shipbreaking yards of Gadani, Pakistan – the explosion on November 1, killing at least 28 workers, and the fire on January 9, with another 5 victims – are direct consequences of the total absence of safety measures,” Patrizia Heidegger, NGO Shipbreaking Platform’s Executive Director, said.
Gadani yards were also closed in November after the series of explosions aboard the oil tanker Aces, reportedly caused by gas wielding processes undertaken during the dismantling work.
However, the Pakistan Ship Breakers Association called on federal and provincial bodies to restart the activities and, following an order by the High Court of Balochistan in December, the works at the site resumed.
0
Tags: fire Pakistan shipbreaking yard explosion
Visit Home
Send to friends
Print
Newsletter
Share this news