China signed a deal with Sri Lanka late last year to further develop the strategic port of Hambantota and build a huge industrial zone nearby, a key part of Beijing's ambitions to create a modern-day "Silk Road" across Asia. 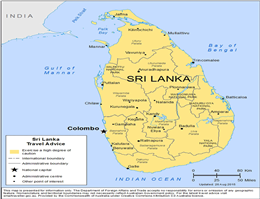 According to MANA, The agreement was welcome relief for the island nation of 20 million people. As they try to reduce the country's debts, officials in Colombo see China's plans to include Sri Lanka on its "One Belt, One Road" initiative as an economic lifeline.
China has spent almost $2 billion so far on Hambantota and a new airport and wants to spend much more.
Hundreds of Sri Lankans clashed with police at the opening last month of the industrial zone in the south, saying they would not be moved from their land.
0
Tags: SRI LANKA china
Visit Home
Send to friends
Print
Newsletter
Share this news